The 22-year-old guard did not return after suffering the injury in the 1st half of Friday's game against Milwaukee. 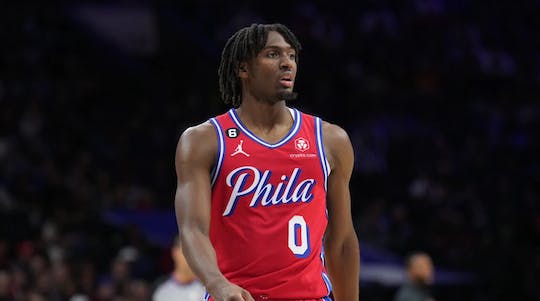 Philadelphia 76ers guard Tyrese Maxey exited Friday’s game against Milwaukee with a left foot injury and did not return.

Initial X-rays were reportedly negative, but an MRI on Saturday showed a small fracture in the Maxey’s left foot, which will sideline the 22-year-old guard three to four weeks, according to multiple reports.

Maxey was on his way to a big night against the Bucks, amassing 24 points, four rebounds and five assists in the first half. He was injured on a foul late in the half, however, and eventually exited for good.

The 76ers are hopeful that Maxey, perennial Kia MVP candidate Joel Embiid, and a healthy James Harden can help the franchise advance beyond the second round for just the second time since 1985.

The Portland Trail Blazers visit the Brooklyn Nets, live at 4:00 AM on NBA TV Philippines.