Milwaukee added the veteran swingman and youngster Rodions Kurucs in its deal with Houston. 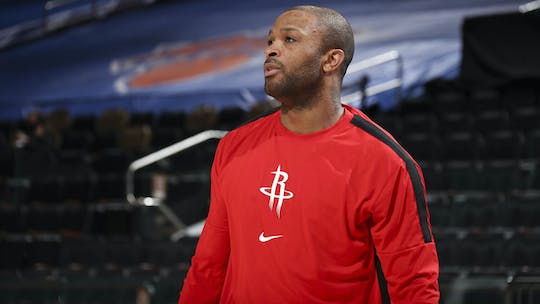 P.J. Tucker and the Houston Rockets decided last week it was time to move on, and Wednesday found a solution for their collective impasse.

The news was first reported by ESPN’s Adrian Wojnarowski and confirmed by several others. Shortly after the deal was made official, the Bucks posted video of Tucker’s arrival in Milwauke

“P.J. Tucker checks all the boxes,” said Bucks GM Jon Horst said in a statement Friday. “He is a great teammate who brings a veteran presence with playoff experience. P.J.’s a versatile, high-IQ defender, and on the offensive end he plays with discipline, is unselfish, and spaces the court with his ability to knock down the three.

“Rodions is a talented, young player we feel will benefit from Coach Bud’s system that emphasizes player development and building good habits. Both players are highly competitive, and we welcome them to our family.”

The Bucks’ next game is March 20, when they will host the San Antonio Spurs (9 ET, NBA League Pass). After a modest 12-8 start to the season, Milwaukee has gone 14-6 and has been one of the best teams in the NBA since Feb. 1.

Tucker is averaging 4.4 points, 4.6 rebounds and 1.4 assists in 30 minutes per game this season. He’s struggling with his shot, firing away at career-low clips of 31.4% from 3-point range and 36.6% overall. Kurucs was shipped to Houston by Brooklyn earlier this season as a part of the James Harden mega-trade. He has played in 16 games this season and is averaging career-lows in virtually every major statistic.

In a separate move earlier in the week, the Bucks sent forward Torrey Craig to Phoenix for cash considerations.