With their Big 3 in and out of the lineup, the Nets failed to reach the championship conclusion they were aiming for this season. 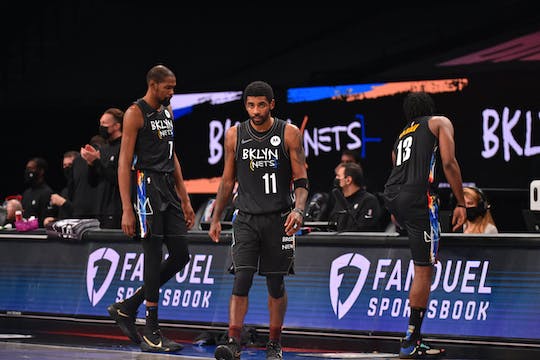 The biggest trade of the season, several untimely injuries, a legendary seven-game series, and a touch of incense: the 2020-2021 Brooklyn Nets were a true marvel.

By all accounts, the Nets were built for a championship right after the 2019 season. Looking for a change of scenery, noted basketball buddies Kevin Durant and Kyrie Irving spurned their respective title contending teams and migrated to Brooklyn.

The gentrification of the Nets took a while since Durant was recovering from an Achilles tear and Irving dealt with his usual injury bug and annual soul-searching. When the Nets duo finally debuted to start this season, the prophesied offensive juggernaut came to fruition.

When the Nets realized that their defense might not hold up despite their unrelenting offensive talent, they made moves. And which piece do you trade for when you have two of the most temperamental stars in league history? The only superstar to have his jersey retired at a gentleman’s club, of course.

James Harden, who very maturely and amicably asked out of Houston, became the third star in the Brooklyn's constellation. It cost them a chunk of their beloved young squad that made the playoffs in seasons past in Caris LeVert and Jarrett Allen plus a ton of draft picks.

While there was concern if three players with somewhat redundant skill sets and similar appetite for the ball can co-exist, these three showed that there are levels to this. The trio adapted easily, as if there should have been any doubt that three of the smartest and most thoughtful stars of our generation could play together.

When the three were complete, Harden acted as the true point guard, harnessing his unique forward-backward style and pinpoint passing to facilitate Brooklyn's offense. Irving was the de facto off-guard. He didn’t do much posting up, but he did attack every seam and gap his co-stars created for him with his killer combination of pull-up mastery and uncanny finishing at the rim. Durant was the nitrous. Just when teams thought they figured out the Nets' trio, Durant always finds another level, a new way to devastate his opponents with unadulterated hoop skills.

We only got eight games of them together all season. It's almost like the three took shifts due to their respective nagging injuries. Even the indestructible James Harden missed the last few weeks of the regular season due to hamstring issues. Still, there was hope when the Nets entered the playoffs with all three intact. That, too, didn't last long.

Bulldozing the Celtics in five games, the Nets booked a second round series against the Milwaukee Bucks in what many believed was the Finals preview due to the usual stars missing the playoffs. It took just 43 seconds into Game 1 of the series for Harden to aggravate his hamstring injury. One Brooklyn star down.

The Nets still outclassed the Bucks in the first two games and nearly went up 3-0, if not for a late turnover and a missed Durant triple. Irving, who had been unstoppable despite the overrated/underrated defense of Jrue Holiday, went down in Game 4 with an ankle sprain and would not return for the rest of the series. Two Brooklyn stars down.

Harden came back for Game 5, but could barely run. These playoffs weren't supposed to go down like this, given how the Nets built their team. They now had to break the emergency glass.

Mustering greatness only the best players ever could muster, and with a tiny bit of help from Uncle Jeff Green, Durant put up an all-time performance – 49 points, 17 rebounds, 10 assists while playing all 48 minutes – to lift the Nets in Game 5.

When the series came down to Game 7 and with Harden still hobbled, Durant was prepared to dig deep again.

Basketball had given KD so much, Game 5 and Game 7 were his way of giving back. Durant again played every minute of Game 7, including overtime. The Nets were supposed to lose in regulation, if not for Durant hitting a turnaround fadeaway over PJ Tucker. The Nets were supposed to have won the series already, if KD had worn a shoe one size smaller. KD had reached the pinnacle of basketball before, so he, of all people, knew that it often comes down to inches.

Overtime carried the soft melancholy of the end of Friday Night Lights the movie. Durant, spent but still trying, heaved shot after shot, missing more and more wildly with each contested attempt. Durant met his limitations, yet he still insisted on defying them. His final shot – an airball 3-pointer in the final seconds – was his final act of resistance. In the end, Durant walked away with another immortal performance, but no championship.

This offseason, the Nets will have to get creative with how they fill their roster. Spencer Dinwiddie, who tore his ACL early in the season, will most likely be fielding offers in the offseason that Brooklyn can't afford to match. Blake Griffin, Jeff Green, Bruce Brown, and Timothé Luwawu-Cabarrot, all of whom were pivotal pieces to the Nets’ experiment, are also free agents that could draw interest from other teams.

What's important is the Nets still have Brooklyn’s three favorite transplants. Championships were not meant to be easy and the borough of Brooklyn knows that, lest we forget that Biggie’s “Juicy” was about the struggles, not the success.