The first hurdle in the Bucks' title defense comes in the form of the DeMar DeRozan and Zach LaVine-led Bulls. 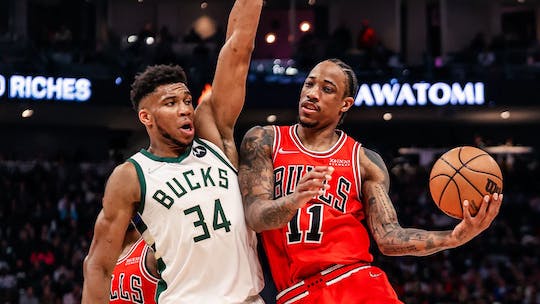 There were moments when the Bucks seemed to be yawning their way into wins, only switching to angry 2021-Finals mode when really needed. Looking into their season series against the Chicago Bulls, that seemed to be exactly the case. After two close games early in the season, the Bucks flexed an extra muscle in their last two meetings. The result? 4-0 for the Bucks.

At the rate the Bucks are going, it would be too hot take-y to even say that the Bulls, who are still missing starting point guard Lonzo Ball, would make them sweat. The playoffs is where the tried-and-tested Bucks rip through the competition. Unfortunately for the talented and thriving Bulls, they’re the first wall in the defending champs’ way.

For a minute there, the Bucks and the Bulls were about to explode into a full-blown rivalry. Grayson Allen’s dangerous foul on Alex Caruso sparked something, but it immediately dissipated. Allen got the token retribution hip-check the next time the two teams met and that was that.

Caruso, who fractured his wrist from the horrible fall, was able to return to the court. His game didn’t though. His shot has been off since the injury, adding to the Bulls’ woes. All these aside, the Bulls can’t seem to crack the Bucks’ code.

This rivalry just won’t take off until the Bulls prove themselves to be the ones with the answer. Until then, the Bucks are the tormenting big brother doing the thing where they put their hand on the head of the smaller brother, as the smaller brother can’t connect, desperately punching air.

Injuries to the Bulls turned them from a complete team at the start of the season to a team heavily dependent on the bucket-getting abilities of DeMar DeRozan and Zach LaVine.

This falls right into the trap of the Bucks’ defense anchored by Jrue Holiday. DeRozan was able to drop an average of 31 points per game against the Bucks this season, but that might not hold up when Holiday is in playoff lockdown mode. How the Bucks try to limit both DeRozan and LaVine will swing the series.

In Khris Middleton’s standards, he’s not having a Khris Middleton-type of season. A championship hangover, perhaps? This doesn’t mean that Middleton isn’t doing well, but from what we’ve learned from the 2021 Finals, there’s a gear that Middleton can get to that’s just plain scary. This first-round series against the Bulls could serve as a good time for Middleton to get into the championship groove. Once he does, the Bulls might not stand a chance. If he doesn’t, well, that’s why the Bucks have Giannis and his broad shoulders.

It will require absolutely everything from LaVine, DeRozan, and Nikola Vucevic to take out the defending champs in the first round of their title defense. And while an upset is always fun, it’s highly unlikely we’ll get that in this series.