After a stellar regular-season run, the league-best Suns are set to begin their playoff journey against the Pelicans. 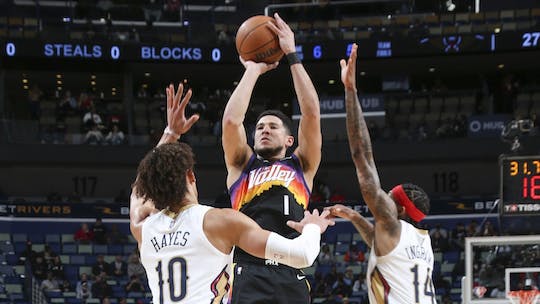 The Phoenix Suns sat at the very top of the league’s standings for most of the season. They are top 5 on both offense and defense, which explains why they accumulated a franchise record of 64 wins and just 18 losses.

Success was written all over the Suns’ season as they held streak after streak in the regular season. Phoenix held an 18-game winning streak at one point, two games shy of the lowest win record in the league. What makes their season more impressive is that they were able to sustain their success even when their two best players, Chris Paul and Devin Booker, were not on the floor.

The Suns will have to face the unlikeliest of contenders in the New Orleans Pelicans.

The Pelicans literally turned things around midway through the season thanks to exceptional trades that worked. They built a new team by swapping players with the Portland Trail Blazers that brought in CJ McCollum and Larry Nance Jr. into the roster. They also signed Jose Alvarado who became a key piece late in the season.

Despite not having any prior experience of playing together and with Zion Williamson still out, the Pelicans made it work. They were just over .500 with a record of 14-13 after the trade deadline. They did enough to  rally from a 13-point deficient in the fourth quarter (after squandering a 16-point advantage in the first half) to get past the Los Angeles Clippers in the play-in tournament, and they are now on their way to their first playoff appearance since 2018.

It’s quite obvious that the Suns have the upper hand in this series. They hold the league’s best record, a homecourt advantage, and a fully healthy lineup. The Pelicans are on quite a Cinderella run as they climbed their way up the rankings at the last minute.

Unlike most storylines that revolve around the players, this one is focused on the top positions.

Before heading to New Orleans, Willie Green served for two years under Monty Williams with the Suns. Green has proven that he is one of the emerging young coaches in the NBA. He had the odds stacked against him when he lost both Lonzo Ball and Williamson coming into the season. Things were grim as the Pelicans stood at the bottom of the rankings without any star player to rely on.

However, Green masterfully turned things around by bringing a less talented roster into the playoffs. While this may not convert into a series win against the best regular-season team, getting this far is already a triumph on its own.

On the other hand, Williams is out to prove one thing – their Finals appearance last year was not a fluke. After their loss against the Milwaukee Bucks, he and the Suns came back stronger than ever. Phoenix did not follow in the same footsteps as the Los Angeles Lakers, who decided to dismantle the team once they got a chip; rather, they focused on building the team’s chemistry and adding complementary reinforcements.

Williams’ season and the way he managed to turn the entire Suns' franchise around is remarkable, to say the least. For his achievement, Williams received back-to-back Coach of the Year Awards from the National Basketball Coaches Association.

"I am just grateful to be in this position, I’m grateful for the guys that I get to coach and work with, but I’m also grateful that God blessed me to be able to come here and be the coach of the Phoenix Suns because when I came down the escalator to my (introductory) press conference, I did not know what to expect," said Williams.

It’s silly to see a grown man sneaking up on players when they have their guard down the way they do… but it works. That’s the funny thing about Jose Alvarado. This late-season pick-up is averaging 8.5 points, 2.2 rebounds, 3.7 assists, and 1.6 steals in just a shade under 19 minutes in their last 10 games.

He is a menace on the floor, constantly pestering his match-up every opportunity he can. It’s rare to see a guy lock in on defense the way Alvarado has, but it’s exactly what the Pelicans need to throw the Suns’ veterans off.

Then there’s Landry Shamet who has filled in the gaps for the Suns when they need him. In his last 10 games, Shamet averaged 10.2 points on shooting splits of 44.8 percent from the field, 35.1 from beyond the arc, and 80 percent from the line.

Even though he’s listed as questionable for Game 1 due to a left foot sprain, he will become a significant factor later in the series. While the Suns have no shortage of shooters and scorers, having a reliable backup who will provide double-digit scoring whenever there’s a drought is always a welcome idea.

The Suns need to trust the process that has been working for them all this time. Coach Williams has done an excellent job highlighting the strengths of each of his players, therefore giving them individual roles in the team system. They should also use all their experience from last season to avoid the same mistakes.

They need to lock in and not discount the Pelicans just from a ranking point of view because New Orleans is peaking at the right time. Two straight wins to put them in the playoffs, and they’re just getting started. They are hungry and excited to be where they’re at. These Pelicans are riding their momentum that it’s not far-fetched to think they can upset the Suns.