The Mavericks were able to stave off elimination in Game 4 against the Warriors by hitting their 3-point shots. 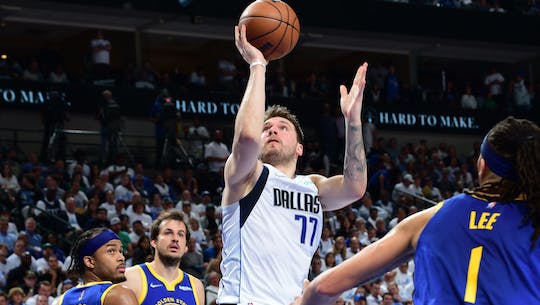 That was Luka Doncic’s response when asked about the possibility of doing the impossible of coming back from a 0-3 series deficit.

It hasn’t been done before. After surviving Game 4 and dodging a sweep at the hands of the Golden State Warriors, the Dallas Mavericks took the first step to a long climb. That very first step involved hitting their 3s. Everything starts there for the Mavs.

In the first three games—and throughout the playoffs, really—the 3-pointer was the thing that dictates where Dallas will end up. Good shooting equals a good night. It has been that simple of a formula. Dating back from the first round, Dallas has won seven games and only lost three when they hit at least 15 3s.

Game 4 was definitely one of those good nights where the shots fell. They went 20-of-43 from deep, building a good enough cushion to finish the game with a win.

Reggie Bullock, who missed all 10 of his shots in Game 3, drained six 3s. Those 18 points are big for the Mavs and probably even bigger for Luka Doncic, who’s been carrying the bull of the scoring load for Dallas.

Doncic still finished with a team-high 30 points, but that’s only because he’s Luka Doncic and this was an elimination game. A fun stat: Doncic is averaging nearly 37 points in elimination games. Translation: he shows up in dangerous situations. The points were nice but his nine assists were also great because it meant his teammates completed their half of the deal.

The question is, will they be able to do it three more times?

They almost didn’t in the fourth. Up 29, the Mavericks again lost their touch in the most crucial time of the game. The Warriors went on a 15-2 run in the fourth, forcing Mavs head coach Jason Kidd to deploy the resting starters back into the game. Whatever rest and momentum the Mavs had, the Warriors threatened to take it away in the end.

Up to the very end, shooting the basketball was the Dallas struggle. Good thing for them, the space was wide enough between them and the Warriors that there just wasn’t enough time for a heartbreaking comeback.

Next game, the Mavericks might not be that fortunate. It will be held at the Chase Center, where the Mavs have not yet won in this series and  where they have shot horrendously before. Dallas’ shooting may or may not work in their favor in Game 5, but it will still dictate the outcome. At least that part, we do know.