Philadelphia's star center sees his 1st action of the series, finishing with 18 points and 11 rebounds to help the 76ers trim their deficit to 2-1. 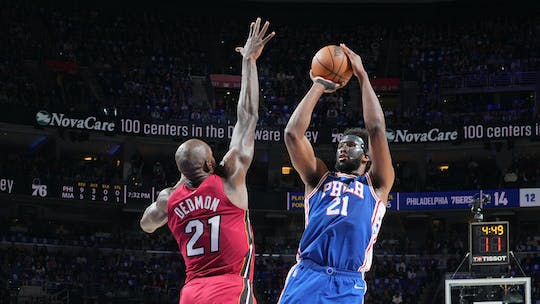 Wearing a black mask, Embiid had 18 points and 11 rebounds after missing the first two games of the series.

Embiid sat out the first two games with a right orbital fracture and a mild concussion suffered in the last round. Embiid wasn’t the dominant force he was throughout the season. With Green, Maxey and James Harden all crushing Heat rallies with big buckets, Embiid didn’t have to carry the Sixers.

But the 76ers sure were glad he was back.

“Any plan where you can have Joel as part of the plan is a much better plan,” coach Doc Rivers said before the game.

Embiid’s status was upgraded from out to doubtful leading into the game, and Philly was buzzing the big man would play. When he jogged out for warmups wearing the mask, Sixers fans erupted and started the “MVP! MVP!” chants that are a staple at the arena. When Sixers public address announcer Matt Cord announced “there are no injuries” on the pregame report, Sixers fans went wild.

Embiid easily heard the loudest ovation during lineup introductions and the Sixers were energized by his presence. It was hard to tell at times Embiid had missed so much time.

“Because of the concussion stuff, he couldn’t do anything,” Rivers said. “So he’s not been able to run and doing other stuff that all of us great athletes would be doing.”

Embiid is still playing with a right thumb ligament injury that will require offseason surgery. Embiid — who led the 76ers with 30.6 points and 11.7 rebounds this season — effected Game 3 just by his presence.

Embiid led the 76ers with averages of 30.6 points, 11.7 rebounds and 1.5 blocks per game during the regular season. And even though he’s bothered by a right thumb ligament injury that will require offseason surgery, he also averaged 26.2 points and 11.3 rebounds in the six games against Toronto in the first round.

Embiid is one of three finalists for MVP, along with Denver’s Nikola Jokic and Milwaukee’s Giannis Antetokounmpo.

During the season, Embiid ranked seventh in the NBA in total points scored in the paint (816) and 12th in total second-chance points (203).

The Sixers weren’t closer than eight points in the fourth quarter of the first two games, and Maxey sees the first quarter as the key to changing that.

“When we go home with the crowd on our side, we’ve got to hit first,” Maxey said Game 2. “Coach Doc said something in the locker room before the game about, ‘Let’s not be a counterpunching team tonight.’ I think that really hit home. We’ve got to go after them first and put them on their heels.”

Philadelphia is battling history, too.

Miami has taken a 2-0 lead in 18 previous series, including the first round this season against Atlanta, and won the matchup every time. The 76ers have dropped the first two games 19 previous times, never recovering to win the series.