Breanna Stewart had a game-high 27 points as Team USA beat Australia to reach the semifinals in the Tokyo Olympics. 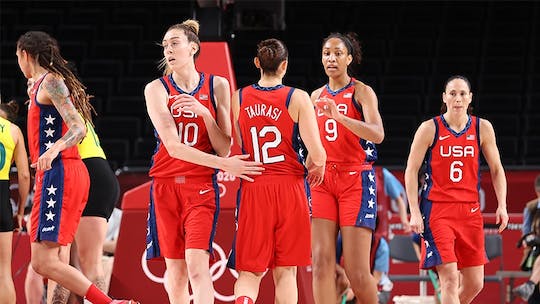 The tension was palpable right from the start – at least for Team USA. You could tell this game meant something bigger because even Kara Lawson, who was calling the game for NBC, sounded even more steely and determined than she usually does.

Then the Americans, in their classic red jerseys that have symbolized their winning tradition, unleashed mayhem on the Australians. Led by the insatiable Breanna Stewart, Team USA dropped a 17-0 run in the first quarter of their Olympic quarterfinals match against Australia en route to taking a 23-6 lead.

All that because Australia beat Team USA in a preliminary match before the Olympics.

Australia, after bringing home silver in 2000, 2004, and 2008 (the Lauren Jackson era), won't make the podium for the second straight Olympics.

Team USA moves on to the semis where they face Serbia, probably the third best team in these Olympics.

Breanna Stewart finished with a game-high 27 points on 8-for-10 shooting with five rebounds and three assists, while also causing the most havoc on the court – the classic Stewie experience.

There was a stretch where Stewart drove for a layup against three defenders on one end then defended a pick-and-roll by herself, leading to the blocked halfcourt shot mentioned above. Thank all the gods for Stewie's superhuman recovery and she’s playing like this after tearing an achilles.

Britney Griner also deserves all the props. She dropped 15 points and eight rebounds, but more impressive was the sight of her grabbing offensive rebounds while Team USA was up 20 at one point.

The most elite athletes have another gear reserved for the most special occasions. We got that today from Team USA as a collective.

Around the end of the fourth quarter, the broadcast showed the USA men’s squad watching the women's game. Apparently they had shifted their practice schedule to be able to catch the game.

There shouldn’t be anything too special about men supporting women. That should be the norm. What was special was Kevin Durant’s mask choice – a whole ski mask.