No one expected the Atlanta Hawks to be where they are now. 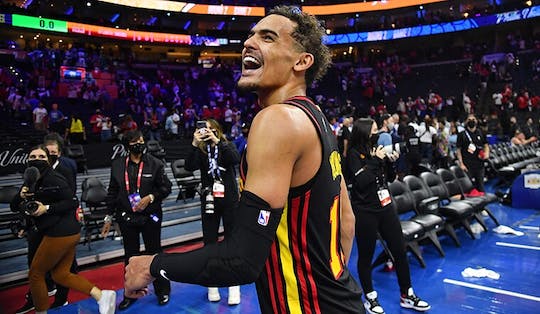 The thought came to me early in the first quarter of Game 7, when Trae Young called for a routine pick-and-roll that ended the way it usually does: an easy lob to Clint Capela.

At first, the thought was one of excitement, along the lines of, “Wow, I’m watching another Game 7, this is awesome, thank you, basketball gods!”

Then, as Kevin Huerter hit an elbow fadeaway jumper, the thought took a dark existential turn: “Wait, why do we have a Game 7 again?”

The Philadelphia 76ers and the Atlanta Hawks maxed out at seven games, in a series that was at times entertaining and most often painstakingly confusing. It got me questioning my own set of basketball beliefs, such as, the team with the best player should win the series (Joel Embiid); the team who dominated at home in the regular season should dominate in the playoffs (the Sixers); the team with two All-Stars should win easily against the team with none (again, the Sixers).

Simply put, the Sixers, doing my own math, were heavily favored to win in a seven-game series against the Hawks. I was so wrong. A lot of us, I assume, were proven wrong by the Hawks, a team that looked highly overmatched many times during the series. But they just refused to go away.

They stole Game 1 (“stole” being the operative word here because it certainly looked like that after being beaten in Games 2 and 3). Then they won Game 4 despite being down by 18 points. Then Game 5 was like, “hold my beer,” and the Hawks clawed their way back from a 26-point deficit to win again.

The Sixers’ obvious game plan was to handcuff Young, and they succeeded for the most part, by allowing him to score 30 instead of 40. But the Hawks had other subtle, unlikely superstars who stepped up, whether it was Lou Williams or Danilo Gallinari or Kevin Huerter.

It seemed like whereas the Hawks under-promised but over-delivered, the Sixers did the exact opposite. A half-healthy Joel Embiid is a big enough reason why that happened, but there’s a sense that this series was never theirs from the get-go.

Philly could’ve easily gone up 3-1, with a chance to close the series in Game 5 at home. Things are never easy in the playoffs though, as the Sixers found out for the fourth year in a row.

So there I was, watching a Game 7 that shouldn’t have existed to begin with if only the Sixers delivered on the promise.

Thankfully, the go-big-or-go-home game was played superbly by both squads, a chess match for the ages. Up until the two and a half minute mark, with the Hawks up three, when Trae went big, as he always does.

With the much taller Ben Simmons getting caught in a screen by his own teammate, Trae had just enough room to launch from way out and succeed. A six-point lead that late in the game gave the Hawks the needed space to pull away from the Sixers. With a costly turnover here and a missed 3 there, the Philadelphia 76ers’ championship dreams were shattered.

Simmons took the heat, not just for his Game 7 blunders, but for his disappearance offensively the entire series. That’s what happens when you miss 30 of your 45 free throw attempts and don’t go for a single shot in the important moments. There will be another time to discuss that.

For now, the takeaway is to never question the Hawks again. They rightfully belonged in a Game 7 against the best team in the East. As they were slowly twisting the knife with every clutch free throw, in the end, they corrected the mistakes I made in my head.

They will now move on to the Eastern Conference Finals, pressure wearing off. They are the team with nothing to lose, and that makes them even more dangerous of an opponent to the Milwaukee Bucks.

The Sixers, on the other hand, will head into another long offseason to face the difficult questions. They can begin with, “Wait, why did we have a Game 7 again?”
Read Next
News