The Phoenix Suns were unable to overcome the shooting woes of Chris Paul and Devin Booker in Game 3. 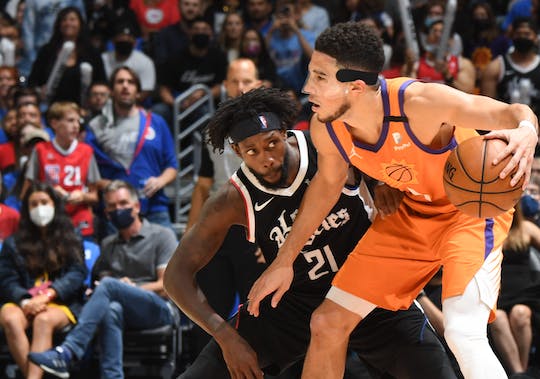 The Phoenix Suns are a cohesive team that’s so beautiful to watch. But when their key pieces struggle, their team collapses.

Phoenix head coach Monty Williams created a system that highlights everybody’s strengths and relies heavily on the guards’ contributions. There are some games when stars Devin Booker and Chris Paul don’t shoot a ton of points but they still win because of their ability to get everyone involved.

Apart from scoring, Booker and CP3 facilitate the offense smoothly and try to get all the complementary pieces going. They have seen a lot of playoff success playing this type of way. The rotation between Paul, Booker, and the emerging Cameron Payne has been effective even against tough contenders.

In Game 3 against the LA Clippers, though, the Suns’ backcourt struggled mightily.

As the opening quarter was winding down, a small scuffle left Payne in pain after suffering an ankle injury. He immediately left the court to have it evaluated and was deemed unable to return for the rest of the game.

Paul, meanwhile, severely underperformed in his first game back after sitting out the last 10 days due to the league’s health and safety protocols. In his return, he had 12 assists but only shot 5-of-19 for 15 points.

“I gotta be better. I shot terrible. I gotta pick up the pace. We’ll be ready for Game 4,” CP3 said after the game.

The Suns were hoping Booker, who had an excellent Game 2 despite the broken nose, would bail them out. But he, too, couldn’t deliver.

Booker had 15 points, five rebounds, and five assists, and like Paul had a dismal night from the field, going 5-of-21 (23.8%) and making only one 3-pointer in 40 minutes of play. As expected, Booker didn’t use the broken nose as an excuse.

“The nose feels fine. We just lost the game,” he said.

The Clippers quickly found this opening and exploited it every way they could. They knew the Suns lean too much on their guards, so keeping them irrelevant in the game puts their offense at a standstill.

“They outplayed us tonight. We didn’t make shots. You could tell that they had a lot more energy,” said Paul.

Although if there’s one thing that fans can expect from this Phoenix team, it’s that they will bounce back and not feel too bad after a loss.

The Suns played elite basketball in the first two games of this series, making the right decisions and trusting their system. They’re playing a great team in the Clippers, so losing one game is natural and will not deter them from the mission at hand.

“The spirits are high. We move on to the next one. That’s the type of team we are, we’ve been that way the whole postseason so we’re going to stick with that,” Booker stated.

Double Data is back on Prepaid Home WiFi! Enjoy 140GB double data for all sites with FamLoad 999, best value for 30 days! Exclusive offer on the GigaLife app.  Download now: http://onelink.to/gigalifeapp
Read Next
News