Summer feels: How Jalen Green navigated his first taste of the NBA

The Summer League gave us a glimpse of what we can expect from Jalen Green in his rookie year. 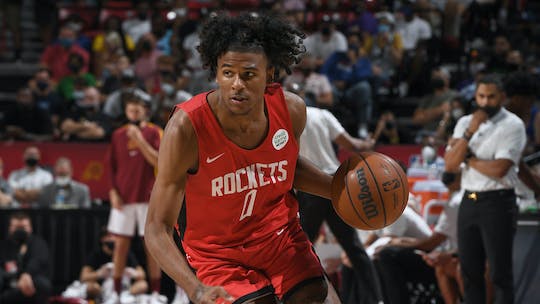 But watching and observing Summer League should come with copious amounts of salt consumption. These are technically NBA teams, but the quality of basketball in these gyms is a mixed bag, to say the least. The combination of rookies getting thrown into their first action and older players fighting for a roster spot creates more garage rock-and-roll than lounge jazz.

Green was, by no measure, a bad player or a bad teammate. He was, in fact, one of the best players in the entire preseason tournament. In the three games he played, Green averaged 20.3 points on 51.4 percent field-goal shooting. He also shot 52.6 percent from deep and 92.9 percent from the line. If there were fears of Green becoming an inefficient chucker in the NBA, his crazy shooting splits in three high-volume, low-pressure games should quell those fears a bit.

Green had his entire bag of offensive moves on display. He got in the paint and finished through contact, found his shots in pick-and-rolls, and hit Harden-esque stepback fadeaways. Houston went all-in on Green's potential on Draft night, passing on the consensus No. 2 prospect, Evan Mobley. If Green’s shown anything in the Summer League it's that he’s comfortable in the spotlight. He embraces the pressure.

Green did and said so many things that it helped hide all the things that he didn't or can't do yet. He dished out two assists per game while averaging 2.4 turnovers. He hit a lot of stepbacks but was also victimized by his opponents’ stepbacks. In this clip of Green meeting No. 1 pick Cade Cunnigham for the first time in Summer League, Green didn't have a lot of highlights in the first quarter or when Cunnigham was guarding him. That's because Cade high-key locked him up when they were on the court at the same time.

These two will forever be linked by the 2021 Draft order. Cade and Jalen are both 19, but Cade is a vegan father of a two-year-old girl. These two 19-year-olds are in different phases of their lives. Cunnigham is very much the yin to Green's yang, just in terms of their approach at Summer League. While Green took every opportunity to create with the ball in his hands, Cunnigham was more laid back – just as comfortable waiting for a kick-out pass as he was delivering it.

It's in these types of meetings that will define Green's rookie campaign. What happens when he gets matched up against five-year veteran and division rival Dejounte Murray? How will he handle having NBA champion and Olympic gold medalist Jrue Holiday going all up in his jersey? What does he do when on the second night of a back-to-back and has to deal with Pat Beverley's tricks?

Jalen Green showed us his bag in the Summer League. What will define the rest of his career is what he can do when he gets his bag taken from him. Will he eventually become a great playmaker ala James Harden? Will he develop the tenacity to keep drawing fouls like Allen Iverson? Or will he find his way?

After all, Jalen Green is one of one. Where Cunnigham tries to avoid social media, Green embraces it. Last week, Green was caught lying. Before the Draft, he said he was willing to make Detroit his home. After the Draft, Green revealed he was relieved to be the second pick and to be living in Houston. He compared his Detroit experience to living in the G-League bubble.

Social media supremacy requires playing chess, not checkers. You might think you had Green en prise, but he’s really just setting you up using his own position.

That's him using his lie, turning it into a drip Easter egg moment, and farming people for massive engagement on Twitter. This is the mind of Jalen Green. If he can navigate controversy with this much guile, he’ll probably figure out NBA basketball.