Phoenix's All-Star guard was having an impressive Game 2, scoring 31 points in 25 minutes, before leaving with the injury. 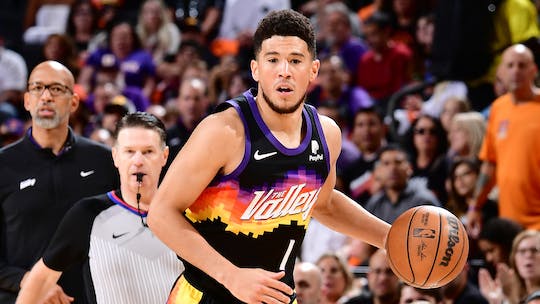 Devin Booker had gotten off to a blazing start in Game 2, scoring 31 points in 25 minutes before exiting.

Suns All-Star guard Devin Booker left Game 2 against the Pelicans with an apparent hamstring injury, according to coach Monty Williams.

Booker was having a fantastic Game 2, scoring 31 points in 25 minutes on 12-for-19 shooting including 7-for-11 from deep before being forced to exit with the injury.

Booker, who will secure some Kia MVP votes this season, was instrumental in top-seeded Phoenix’s 110-99 Game 1 victory, scoring 25 points to go along with eight rebounds and six assists.

Williams added the the team will “know more after the game” as the extent of Booker’s injury.