The WNBA kicked off its historic 25th season with a bang. Here's what we learned from opening weekend. 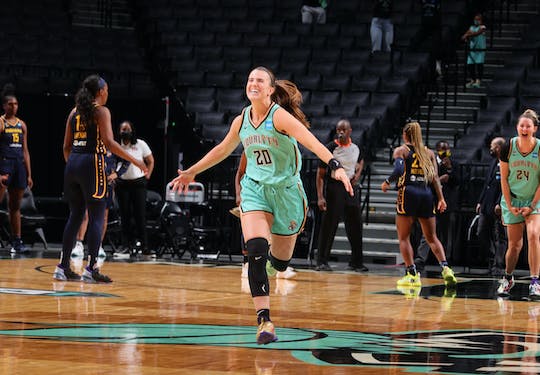 The highly anticipated 25th season of the WNBA opened with a splash. The jerseys were on fire, the teams put on a great show, and more importantly, the support was through the roof. #WNBATwitter was buzzing with excitement. Fans and fellow athletes repped the league by wearing their favorite WNBA merch.

The New York Liberty and Connecticut Suns emerged as early leaders after grabbing back-to-back wins. Phoenix Mercury won one and lost one, while the Indiana Fever absorbed a couple of losses.

Beyond the win-loss records, let’s take a look at the highlights of the WNBA’s opening weekend.

The future and the legend unleashed game-winners

On one hand, you had sophomore Sabrina Ionescu announcing her return from injury with a game-winning 3. On the other, you had Diana Taurasi swishing the same game-winning shot like it was just another day at the office in Year 17.

Ionescu not only nailed the final go-ahead basket with 0.4 seconds remaining. She also scored the last eight points for the Liberty, finishing with 25 points, along with 11 assists and six rebounds.


We were robbed of Ionescu’s rookie year when she injured her left ankle after just three games in the Wubble last season. Now, she’s back on the court and ready to continue where she left off. “I wanted it,” Ionescu said about the game-winner. “I haven’t played in a while. I wanted it for this team.”

Taurasi, meanwhile, knocked down the 3 that pushed the Mercury past the Lynx. She was just 2-of-12 from the field before that moment, but it did not matter.

Teammate Skylar Diggins-Smith told Taurasi in the timeout: “You’re shooting the next one.” And in true GOAT fashion, Taurasi delivered.

"You're shooting the next one." - @SkyDigg4 to @DianaTaurasi in the timeout.

Last night was quite the way to kick off Season 25 #4TheValley pic.twitter.com/k9Jao8WJVi


Rookies showed up in their debut games

Charli Collier, the 2021 WNBA Draft top overall pick, seemed to translate her game into the pros just fine, particularly her rebounding. Tallying 11 points and 10 rebounds, she became the first Wings rookie to notch a double-double in an opening game since the team moved to Dallas.

First career game in the #WNBA and @charlicollier notched her first career double-double ?


Michaela Onyenwere, whose grandma stole the show in the draft with her dance moves, also dazzled in her debut with the Liberty. The first official basket of the 25th season belonged to her as she hit a triple for the first points in her pro career. She finished with 18 points and five rebounds.

Onyenwere looked real comfortable in the big league as she followed it up with an 11-point, five-rebound performance against the Fever.

The reigning champions are ready to defend the crown

After receiving their rings and lifting their championship banner, the Storm made sure to win against the Aces, their recent Finals nemesis.

Breanna Stewart (28) and Jewell Loyd (22) combined for 50 points, becoming the first duo to each record at least 22 points in an opening game. Stewart also contributed 13 rebounds.

The matchup between Stewart and reigning MVP A’ja Wilson did not disappoint. The two young superstars are predicted to lead the MVP race again this season.

Sue Bird moved up to No. 7 on the WNBA’s all-time scoring list after earning her 6,264th point. This, after she hilariously freaked out upon learning that she’s the same age as the mom of her new teammate Kiki Harrigan. “She’s 40 the same way I’m 40!” she exclaimed.

By popular request, here is the hilarious video of Sue Bird talking to media today about how she found out that her new teammate’s mother is her same age. Must watch! #SeattleStorm #TakeCover #WNBA #WNBATwitter pic.twitter.com/LvhF3iE75H


Candace Parker in a Chicago uniform is an unusual sight

Candace Parker spent 13 seasons with the Sparks, so seeing her with the Sky was strange, to say the least. But she did not look like she was new; she looked like she had been with her teammates for a long time.

The Sky welcomed Parker with open arms, of course. The veteran backcourt duo of Courtney Vandersloot and Allie Quigley is excited to win a championship with her. The young ones idolized her growing up. Azura Stevens even made a Parker doll for her middle-school project.


Parker was a Chicago native, after all, so it was a real homecoming for her. “It felt like home, it really did,” she said after casually dropping 16 points, eight rebounds, four assists, and three blocks for a road win against the Mystics.

The Dream dropped the mic with an awesome intro video

Everybody knew that Atlanta would bring a lot of surprises this season, what with a new ownership group led by former star Renee Montgomery, a new interim coach, and a new lineup that includes No. 3 pick Aari McDonald.

Before the season opened, the Dream announced an all-female, all-Black broadcast team for their telecasts. And for their season opener? They went all-in with an intro video featuring poet Ashlee Haze.

This is how the @AtlantaDream is coming from now on! 🗣#DoItForTheDream #MEM


Tamika Catchings inducted into the Hall of Fame

Speaking of dropping the mic, Tamika Catchings delivered an incredibly moving speech for her Hall of Fame enshrinement.

Listening to the entire speech is highly recommended, but if you don’t have the time, at least listen to these 13 seconds:


More than the long list of awards that Catchings accumulated in her career, the inspiring way that she overcame a hearing disability and speech impediment, along with all the ways that she consistently gives back to the community, would be her biggest legacy.

Despite getting swept by the Suns in the West semis, league MVP Nikola Jokic and the Nuggets still have a lot to look forward to.