The Brooklyn Nets Big 3: A Eulogy

The super trio of Kevin Durant, Kyrie Irving, and James Harden didn’t last long, but it sure gave us good memories. 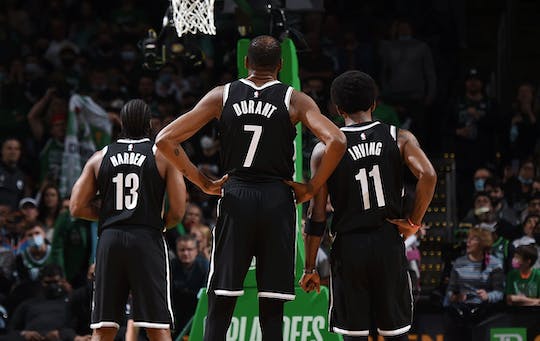 How do you measure these scary six hours? In highlights? In high-fives? In inches from the 3-point line?

How about vibes? Measure in vibes. A season (give or take) of vibes.

It is with great sadness and heavy hearts that we say goodbye to the Brooklyn Nets’ Big 3 of Kevin Durant, Kyrie Irving, and James Harden. They were a trio so massive, so powerful, that time and space just couldn’t handle it. A vibe so strong doesn’t always last long.

The Durant-Irving-Harden team-up beamed with promise, but someone was always missing. It was like a perfect song was written, but the band just never got to finish playing it live for anyone to hear. The jam was always cut short.

They changed what it meant to score the basketball at will, while smirking at the unbelievers who threw stones at them, saying they can never, ever share the basketball. When the three of them existed, they co-existed. They dominated.

On defense–to pay respects, we will not talk about the defense.

What we got from Durant, Irving, and Harden were catchy, satisfying hooks. It always reeled us in. To what end? We don’t know. We didn’t even get to the chorus. The fun lasted for 16 games, where the Nets lost only thrice.

They left us with fond memories, the most recent of which is the beatdown they gave the Chicago Bulls. The game was played not in Brooklyn, which meant Irving was allowed to join his friends. The three combined for 61 points, 28 assists, and 13 rebounds. It was a reminder of what could have been.

Harden has found a new home in Philadelphia. Irving is still yearning to be allowed back home. Durant, always all heart, will be home wherever he is.

It's time now to sing out, though the story never ends. Let’s hope only sages were burned and not bridges. Let's celebrate 13-3.