The Cavs are a different kind of bad

This early in the season, the Cleveland Cavaliers have been exceeding expectations. Why is that? 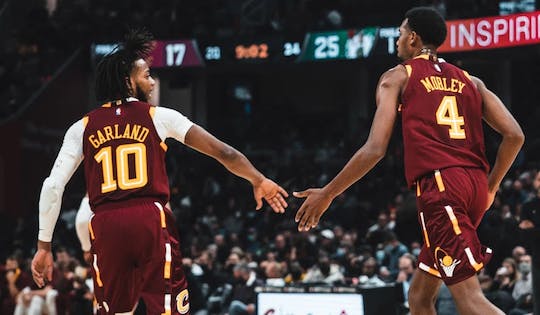 The Cleveland Cavaliers are currently living in some sort of crime TV series. At least that’s how it feels like every time I watch them take on teams that are supposedly better than them. That’s a lot of teams.

Last season, the Cavs won only 22 games of a possible 72, finishing 13th in the Eastern Conference. The season before that, they only won 19 games and sank dead-last in the East. Cleveland didn’t pose much of a threat entering this season, either because of reputation (they no longer have LeBron James) or history (they no longer have LeBron James).

The Cavs hired Ricky Rubio, Lauri Markkanen, and Evan Mobley in the offseason to do the dirty work for a team that seemed to be perpetual underdogs.

Immediately and effectively, the underdog brand was embraced by the new-look Cavs and used in their favor. It started with the weird, funky lineup. The Cavs frontcourt consisted of three big guys in 6-foot-11 Jarrett Allen, 7-foot Markkanen, and 7-foot Mobley. The backcourt had two shoot-first point guards in Collin Sexton and Darius Garland. At times, they were joined by the pass-first point guard Rubio. What’s happening here? An experiment gone haywire, that’s what. The Cavs are breaking bad.

At first, it seemed like the Cavs were their normal selves, losing the first two games by double digits to the Memphis Grizzlies and the Charlotte Hornets. Then came three straight wins against the Atlanta Hawks, Denver Nuggets, and Los Angeles Clippers—all considered upsets, based on last season’s rankings.

They also had a crazy stretch where they won six of seven games, the only loss coming from the then conference-leading Washington Wizards. Crazy not only because that kind of run was unheard of last season, but because of the way they did it.

One win against the Portland Trail Blazers came from Allen refusing to let Damian Lillard see daylight on his potential game-tying buzzer-beater. Another win came from a 37-point night from Ricky Rubio on eight 3s off the bench in Madison Square Garden. And another win came despite being down 19 points against Boston.

The Cavs currently have a win-loss record of 12-10, the first time they’re above .500 through 20 games since 2017 (when, of course, they still had LeBron James). Their schedule for the first month of the season isn’t a picnic, either. They hung in there but just came up short against strong teams like the Brooklyn Nets and the Phoenix Suns. They built a big lead—and eventually lost it—against the Golden State Warriors. Yes, the wins looked great, but even their losses looked good.

It would be easy to conclude that the Cleveland experiment is, indeed, working, but even that doesn’t seem accurate. The Allen-Mobley-Markkanen trio hasn’t shared the court all that much due to injuries. Mobley missed four games while Markkanen was sidelined for nine. Their star guard Sexton is out for the season.

Yet despite all the things not working for them—the schedule, the injuries—the Cavs have found a way to beat teams in style. They’re doing it not in a heist-y, petty thievery kind of way. It’s more like an organized crime ring that’s highly sustainable.

In their last three games, the Cavs won with a margin of at least 13 points. Another shocker since the last time that it happened was in 2015.

In that stretch, Garland killed it as the primary ball-handler and bucket-getter in lieu of Sexton, scoring 26, 18, and 16. For the season, Garland is averaging team-highs in both points (18.5 per game) and assists (7.2 per game).

Watching Garland operate is a thrilling experience. He’s not quite poised and calculated like Rubio, but that’s just part of the fun. The recklessness works.

Up front, the twin towers of Mobley (15 ppg, 8 rpg, 2 bpg) and Allen (16 ppg, 11 rpg, 1 bpg) are two henchmen that simply get the job done. They’re dogs, both in the way they hustle in every play and the way they actually bark when things go their way.

The barking has apparently been a thing that the team does, in practice and games, to hype each other up. It has a bite to back it up, manifesting in the form of a dog mentality defense.

Here’s a fun question: can you name the third-best defensive team in the league behind the Phoenix Suns and the Golden State Warriors? That’s right, the barking sounds are coming from Cleveland.

That’s the scary part about the rise of the Cavs. They’re not doing it in a sexy, flashy way that would make them House of Highlights darlings. They’re on an obscene, almost criminally illegal mission to shut things down on the opponent’s offensive end (see: Duncan Robinson).

Since the LeBron-James-Just-a-Kid-from-Akron era ended, Cleveland has been bad and has always been in danger of being beaten. But they’re a different kind of bad now. Today, Cleveland is the danger. They’re the team that knocks. And barks.