The evolution of Russell Westbrook

Over the course of his career, Russell Westbrook has learned to evolve his game and adapt to different team situations. Russell Westbrook has already been a fourth draft pick, two-time NBA All-Star MVP, regular season MVP, and Olympic gold medalist at the age of 32. This decorated guard has had quite a career filled with magnificent highs and terrible lows.

From his rookie years in the Oklahoma City Thunder to his first year as a veteran with the Washington Wizards, Westbrook has met several criticisms regarding his game. His passion and on-court energy are contagious and unmatched, but his consistency and adaptability have been hindrances to his performance.

However, to understand why things have gotten to where they are, we need to explore the start of his career and the development of the Russell Westbrook we know today.

It all began when Westbrook was drafted in 2008 by the Thunder. At that point, OKC already had Kevin Durant on board and would draft James Harden the succeeding year. What followed was a crazy run that not a lot of fans expected.

The combination of Westbrook, Harden, and Durant shaped into a young super team that was packed with talent and athleticism, but lacked heavily in structure.

With a team as young as they were, the coaching staff practically let them do whatever they wanted as they tried to discover their true game in the NBA. This meant a lot -- and we mean A LOT -- of isolation plays.

Because the three were the elite guys on their respective squads prior to entering the league, a lot of their experience in college ball focused on their individual performance. As they moved up into the NBA, they took the same mindset and played like they were taking turns playing one-on-one.

In fact, it was normal for the Thunder to be in the bottom 10 in assists because they were not running plays as much as the other teams did. And while this would have been a problem for some, the funny thing was that it worked. Harden, Durant, and Westbrook were just so immensely talented that their skill sets alone carried the whole team. 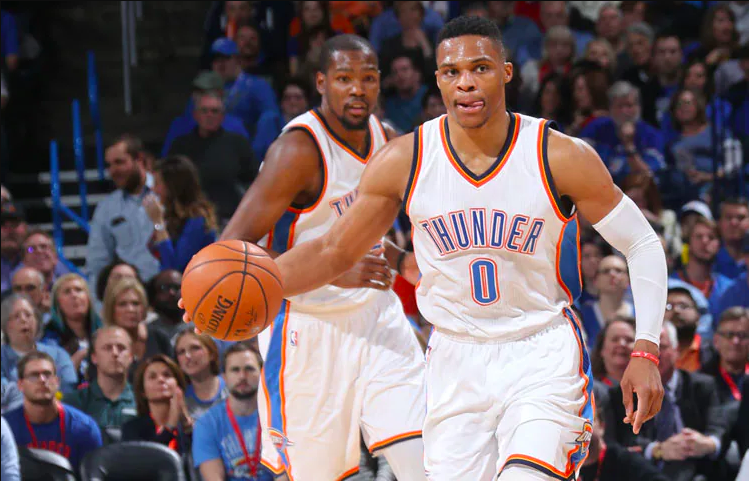 Fortunately for Westbrook, this type of play helped him improve his individual career. Year after year, fans saw a rise in his points and shooting percentages, especially in the paint. Westbrook was just so athletic, and his lack of shooting from long distance was compensated by his ability to break down defenses and get to the rim.

Then came the Harden trade, which further boosted Westbrook’s performance.

Both guards are known to be extremely ball-dominant players. As the one calling the shots, Harden and Westbrook needed to take control of the possession every single time. However, because the two were playing such similar roles side-by-side, it started to get redundant. With Harden out of the picture, there was less competition with touches, putting Westbrook in charge of the whole ship.
After Harden was traded, Westbrook turned into a more sophisticated player. Not only were his points going up, but even his contributions in assists and on defense started improving every single season. Problem solved, right?

It was in this stretch that analysts and fans alike started noticing that Westbrook’s numbers were getting good -- a little too good. In the 2015-16 season when the Durant-Westbrook duo led the Thunder to the Western Conference finals, Westbrook was averaging 23.5 points, 7.8 rebounds, and 10.4 assists. He capped the year with a double-double per game, and that raised some eyebrows.

He was accused of stat-padding after fans started noticing that he was receiving credit in a manner that was not very helpful. He was heavily criticized for giving up good possessions to reach certain numbers on the stat sheet.

However, what a lot of people didn’t realize was that most of these issues were born out of necessity. With Harden getting traded, there was a significant gap that needed to be filled. KD was already the designated scorer because he was the best player on the roster. If he fills in what Harden left, then the team becomes predictable. Shutting down KD meant shutting down the Thunder.

The challenge had to be absorbed by Westbrook. Instead of giving all the opportunities to their main man, the coaching staff decided to develop Westbrook into a more efficient scorer and playmaker.

That’s why later on, when KD moved to the Golden State Warriors, Westbrook’s numbers ballooned into triple-double averages. Instead of forcing isolation plays every single possession, he learned to develop his playmaking ability, further improving his individual career and his teammates’ performance. Each possession was more deliberate, getting others—like Carmelo Anthony and Paul George—involved.

He soon reached his peak performance as a player. At 28 years old, his high basketball IQ paired with his skills and athleticism earned him the MVP trophy. 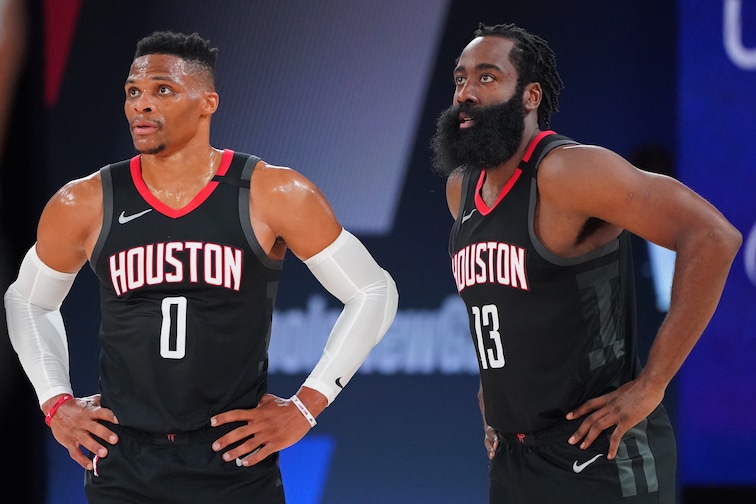 However, after 11 seasons with the Thunder, he was traded to the Houston Rockets to reunite with Harden.

As many expected, the tandem caused a lot of confusion on the court. The reunion presented a similar situation involving two ball-dominant players, only this time the team was built on Harden instead of Westbrook. His talent was undeniable, but with a partner who played so similarly, fans then wondered: where would he fit?

The two would figure it out, they said, but it seemed like they never did. One good thing, however, bloomed from the partnership. Westbrook showed glimpses of his ability to adjust. He finally recognized his weakness in shooting from long range, and started taking shots closer to the rim. He acknowledged that the Rockets didn’t need a shooter from beyond the arc, they had Harden for that. What they needed was someone who could break down defenses and create plays to get others involved -- something that Westbrook finally figured out after a few years. The transition bore results in his field goal percentage, which went up to 47.2 percent compared to his 43.4 in OKC. Unfortunately, it was not enough for the Rockets, who decided to let Westbrook go and ship him to the Washington Wizards.

The entry of Westbrook was predicted to be the key for the Wizards’ playoff hopes. He brought his tenacious personality to Washington and built a stronger backcourt with Bradley Beal by his side.

The tandem seems to be a match made in heaven for Westbrook since Beal’s game is the exact opposite of his. Because of his past partnership with John Wall who has similarities with Westbrook, Beal learned to be an excellent shooter who doesn’t need the ball that often. Beal has the highest scoring average this season at 31.7 points, but he does not hold the ball as long as Westbrook does. 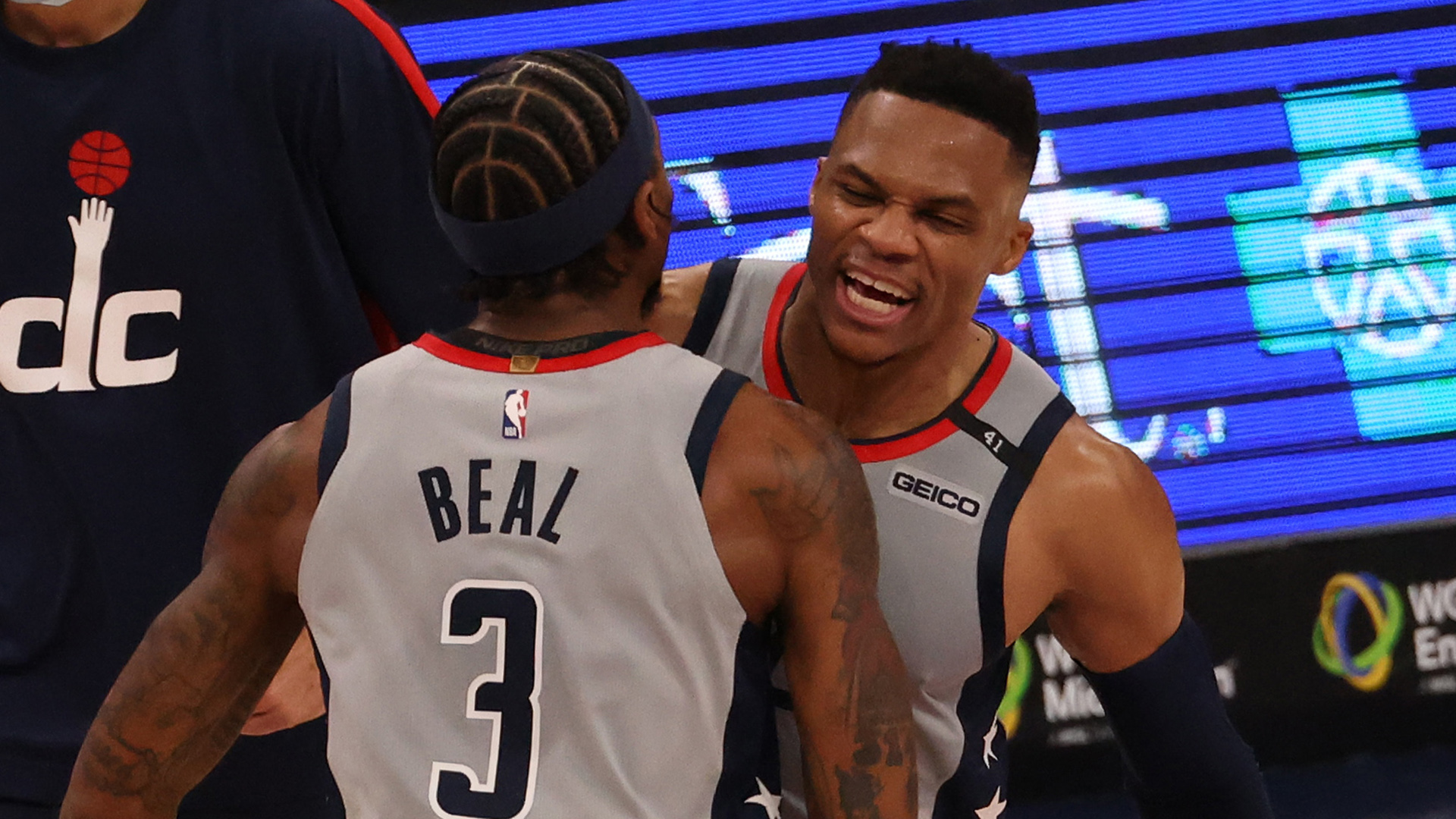 As Westbrook’s speed and athleticism dwindle with age, his ability to get guys involved makes him even more relevant to the team. He has reliable offensive talents in Beal and Davis Bertans, so he doesn’t need to force himself to score as much as he used to. Arguably, his body slowing down is working in his favor because it is allowing him to think about each possession more than the usual go-with-the-flow attitude he had during his younger years.

The one thing he needs to focus on to secure a playoff spot is consistency. Westbrook can undoubtedly hit game-winning shots, but he also has a tendency to make costly mistakes in the endgame. With a team that is so far behind because of a bad start, he cannot afford to keep losing games because of a botched possession or two.

He also needs to be a consistent defensive presence. In OKC, he had Serge Ibaka to cover for the other end; he doesn’t have anyone like that right now. He needs to be a nuisance to his opponents, something he has shown he’s capable of doing, to help the Wizards’ cause.

And even if they don’t make it big this year, the move to Washington has been the best for Westbrook’s career so far. He finally found a partner who complements the way he plays. He has revamped his game to benefit his team, and he’s surrounded by a young pool of players that he can mentor. Once the Wizards figure things out and establish chemistry, they can be a lethal contender in the East. They just need a little more time, and a lot more consistency from Russell Westbrook.