The grind is about to get tougher for Kai Sotto

Kai Sotto's basketball career has taken a different turn, but the challenges that lie ahead are only going to make him a better player. 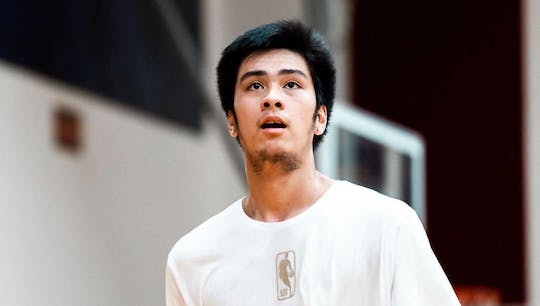 Kai Sotto has a lot ahead of him in the next few months.

After being part of the G League Ignite program, Sotto is focused on creating a new pathway towards his NBA dream. He secured a multi-year deal to play for the Adelaide 36ers in the National Basketball League (NBL) and reaffirmed his commitment to Gilas Pilipinas, a pair of announcements that were made through a virtual press conference organized by Smart.

Sotto has been considered a top international player since his Batang Gilas debut in 2017. At 7’3”, he has dominated leagues—here and abroad—because of his athleticism and improved skill set. Many thought the NBA was the next step, but Sotto was deemed ineligible to join the 2021 draft, which led to the decision to join the NBL.

Adelaide 36ers head coach Conner Henry, who was a champion coach in the G League, is familiar with the style of play Sotto has been exposed to during his brief stint with Ignite. Impressed with what he can offer at such a young age, Henry is excited to see how far Sotto’s development can go and how it will impact their team. He also believes playing for the 36ers is “an ideal landing spot for Kai and his development.”

“When Kai’s name was brought to me a few months back, the coaching staff and I started doing some investigation on who the young man was and what skills he had. At 7'3", you’re immediately intrigued basketball-wise—can he play, and does he have a certain skill level at that size and at that age? When we saw initial film of him, we were immediately excited. He has a really solid feel of the game. Those types of things you can’t really teach,” said Henry.

“With Kai’s size, he’s going to be a great target to roll to the rim or he can finish. As he develops his perimeter game, which he already has a very good feel for, [he would fit] one of the trends in the NBA now is where you have a stretch five. He’s got skill sets that are going to continue to develop.”

Sotto acknowledged that there is a lot to improve on to make himself an elite player. He is focused mainly on getting stronger, especially now that he will be going up against tough professionals in Australia.

Because of its large crop of talents, the NBL is known for producing NBA players like Joe Ingles, RJ Hampton, and LaMelo Ball.

“The National Basketball League is a tough league, it’s a very strong league -- it’s also an improving league. It’s gone from being, we think, one of top 10 leagues in the world perhaps 10 years ago, to what I think certainly in the top five leagues in the world now,” said 36ers general manager Jeff Groningen.

Part of the challenge for Sotto is to help boost a team that has not won a championship since 2002. It’s unclear now how much Sotto will contribute to the 36ers, but Groningen said this experience will only help him evolve as a player who intends to make it to the NBA.

“The young man is on the path. He has work to do, he’s aware of the work that’s ahead of him. But he’s also a talented and gifted young guy that has the physical attributes, as well as the interest in the game and the love for the game,” said Groningen.

While his commitment to the 36ers has been one of the biggest jumps in his career so far, Sotto also reaffirmed his involvement in the Gilas Pilipinas program. The inclusion of Sotto will help deepen a roster of young guys that will not include PBA players. He will be joined by Gilas staples like Isaac Go and brothers Mike and Matt Nieto, among others.

“Playing for their national team is the top goal for any athlete. I’m thankful to everyone for this opportunity, and I’m just excited for what’s ahead. Let’s all help each other succeed,” said Sotto. “The ultimate goal is to make my kababayans proud and hopefully open more doors for more young Filipinos because that’s a priority for me, as well,” said Sotto.

It will be a hectic schedule for Sotto in the next coming months. Gilas will be busy preparing for the FIBA Asia Cup and FIBA Olympic Qualifying Tournament in June. After his national team duties, Sotto will then have to fly to Australia with the NBL preseason slated to begin in August and the regular season opening in October.

Despite his basketball commitments, the 18-year-old Sotto said creating an accessible sports facility for the younger generation is still one of his top priorities.

[We are so lucky that the Kaiju Global Academy and the people from Spooky Nook Champion Mill have the same goals, the same plans. So from that alone, it’s already a big win for the Kaiju Global Academy. That’s really the goal, to have something similar in the Philippines and hopefully in other countries too… I always say that my goal is to inspire the next generations, especially my fellow Filipinos.]
Read Next
News