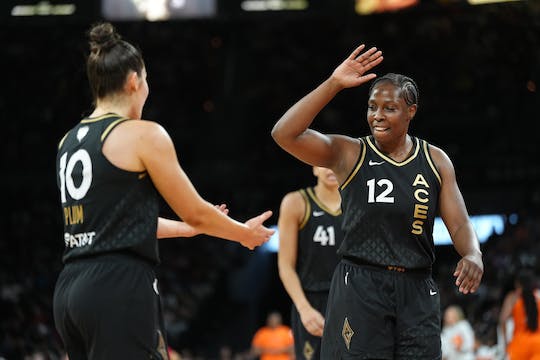 Early in the game, it seemed like the close score in Game 1 would dictate how Game 2 would be played. The Connecticut Sun were in a back-and-forth battle with the Las Vegas Aces, as both teams traded baskets and leads in the first seven minutes of the game.

Then Las Vegas decided they were done playing around.

The Aces’ back court of Chelsea Gray and Jackie Young kickstarted a 9-1 run to close the first period that would give their team separation from the Sun.

Connecticut challenged once again early in the third quarter with Alyssa Thomas and Jonquel Jones leading the way. They cut the deficit down to just three points and it looked like they were about to make it interesting.

Kelsey Plum wasn’t interested in keeping things close. She scored or assisted in her team’s next five possessions, leading them back to another double-digit lead. From there, the Aces never looked back. They built a lead as big as 20 points to run away with the win.

A’ja Wilson once again played like an MVP, leading the way with 26 points and 10 rebounds. Plum had 20 points and seven assists.

It’s getting hard to pick just one big-time baller for a team as stacked as Vegas. They had three players who scored 20 points or more. But for this game, the tag goes to Gray, who finished the game with 21 points and eight assists.

i am running out of the words for Chelsea Gray. pic.twitter.com/sEDN2lrylt

What’s even more impressive was the fact that Gray left the game midway through the third quarter to tend to an injured ankle.

Chelsea Gray checks back in and the crowd goes wild -- almost as wild as when everyone in the arena earned a free pizza slice after that pair of missed Brionna Jones FTs https://t.co/KAxpw3wjcz

She came back, literally minutes later and was able to still do this to the Sun:

That was Coach Gregg Popovich’s assessment of Becky Hammon’s head coaching stint with the Aces so far.

When the all-time coaching wins leader of the NBA decides to step aside, you know you’re doing a good job.

Star guard Khris Middleton has missed Milwaukee's first 20 games of the 2022-23 campaign as he recovered from left wrist surgery.