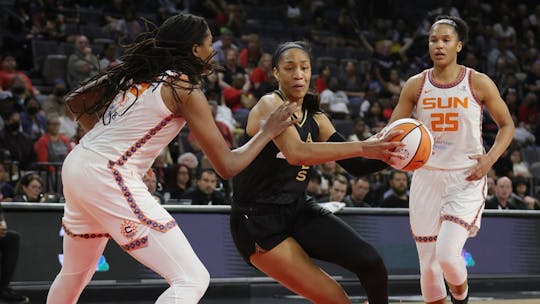 The Aces are the first team on the board in the WNBA Finals after outlasting the Sun on their home court.

The Aces established a seven-point lead, 67-60, after Kelsey Plum split her chances at the line. But back-to-back baskets from Alyssa Thomas made it a one-possession game with 34 seconds left. Gray tried to hit the dagger but her shot was blocked by Thomas, setting up one final chance for the Sun. In the last possession, the Aces leaned on their defense to seal the win, forcing DeWanna Bonner to an off-balanced attempt from deep as time expired.

The game turned out to be a grind-it-out affair but the Aces proved that they can play a different style from what they’ve been accustomed to. After producing 103.5 points in their last two wins in the semis, they struggled to score the basketball with the Sun defense all over them. But Wilson and company dug deep and countered everything the Sun threw at them.

Connecticut was led by Thomas’ 19 points, 11 rebounds, and five assists followed by 15 points and nine boards from Jonquel Jones.

The 2022 WNBA MVP and Defensive Player of the Year was in full display in Game 1. A’ja Wilson dropped 24 points, including 12-of-14 from the line, alongside 11 rebounds. She also had two steals and four blocks in an all-around effort, putting her team on her back.

Wilson’s individual awards this season is a testament to her constant improvement as one of the faces of the league. Another underrated aspect of her growth is her leadership, willing the Aces to the franchise’s first-ever win in the Finals. Here she is postgame talking about her leadership style:

"You gotta want it and honestly I never understood how important my role was on this team until this year"@_ajawilson22 speaks on how instrumental her voice is within the @LVAces team and showing up for her squad when it matters the most 🔥 pic.twitter.com/DiMVikGypf

With Memphis Grizzlies star in attendance, you know he pulled out his signature celebration alongside A’ja Wilson.

The Lakers guard has been suspended for forcefully shoving Deandre Ayton.