The NBA is back! The Warriors took down the Lakers and the Bucks got past the Nets on opening day of the 2021-22 season. 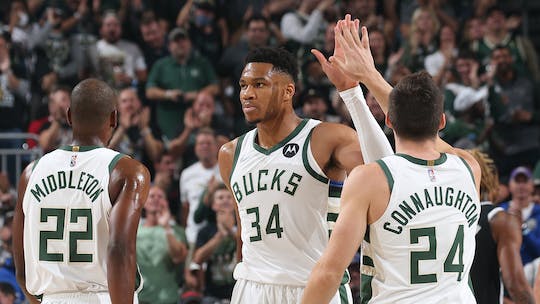 The Golden State Warriors started their 2021-22 campaign with a 121-114 victory over the Los Angeles Lakers on opening night.

An unlikely hero emerged as Jordan Poole tallied 20 points, two rebounds, and three assists. With Steph Curry struggling with his shot, the Warriors’ bench stepped up with 55 points. Nemanja Bjelica came off the pine with a double-double of 15 points and 11 rebounds and Damion Lee added 15.

LeBron James and Anthony Davis carried the Lakers’ offense in the opening loss. The duo combined for a total of 67 points with 11 rebounds apiece. Unfortunately for the Lakers, there wasn’t anyone who could back them up. Russell Westbrook went 4-of-13 from the field and only had 8 points in his Laker debut.

The Lakers started the game strong, justifying the hype surrounding their Big 3. James and Davis led the charge as LA took control of the match with their defense, holding Curry down to just three field goals in the first half. However, things quickly turned as they came back from the break.

Golden State turned the tables in the third to grab the lead behind Poole’s hot shooting. Curry was also able to find his groove in the second half as the Warriors upset the Lakers at Staples Center to open the NBA’s 75th season.

Out East, the defending champs Milwaukee Bucks took care of business against the Kevin Durant-led Brooklyn Nets, 127-104. Prior to the game the Bucks received their championship rings, which was a special moment indeed for the franchise.

That jewelry looks even better in #PhantomCam.

Giannis Antetokounmpo was quick to shake off the three-month break as the Bucks opened their title defense with a win over the Brooklyn Nets. The reigning Finals MVP set the tone early with 13 points and eight rebounds in the first period for the Bucks before ending the season-opener with 32 points (13 in the first quarter), 14 rebounds, and seven assists. He shot 48 percent from the field and an impressive 7-of-9 shooting from the line.

The reigning Finals MVP picked up where he left off. #KiaTipOff21 pic.twitter.com/0delPLr09y

Usually, when a player gets a triple-double, they’re beaming with excitement—not Steph Curry, though.

"I played like trash... but if we can win a game like that, where we created some good shot and stuck with it defensively... that's a good omen for us."

"I played like trash... but if we can win a game like that, where we created some good shots and stuck with it defensively... that's a good omen for us," Curry said after the game.

He only shot 5-of-21 but finished with 21 points, 10 rebounds, and 10 assists—his first triple-double (eighth career overall) since January 2016.

Despite his “bad game,” Curry is hopeful and excited for what is to come.

“This is a good feeling. We had a lot of excitement coming into the new season. New cast of characters mixed with our core, and we weathered the storm tonight.”

For a moment, Khris Middleton thought he was in the NFL. The Bucks came out fully in sync as seen by his full-court dime to the running Antetokounmpo.