The Rundown: Clippers knock down Lakers in battle of LA

The Clippers, led by Paul George's 24 points, cruised past the Lakers who were still without LeBron James. 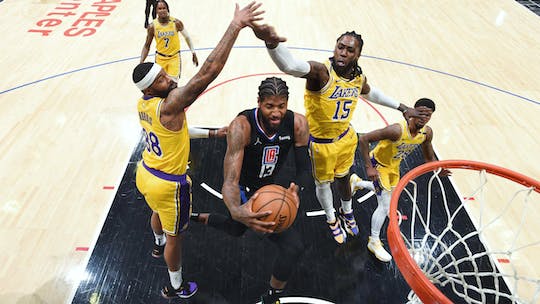 It was another LA versus LA game, but this time it was the Clippers who won, handing a 24-point beatdown on the Lakers.

With LeBron James and Dennis Schroder out, the Lakers had some difficulty navigating through their offense especially in the first half. A healthy Clippers roster was in sync and worked as one unit on both ends of the court. A 9-0 run midway through the first quarter gave the Clippers the upperhand early in the game as they shot 62.9 percent from the field in the first half.

Kyle Kuzma tried to carry the Lakers through the first two quarters with 15 points, but it just wasn’t enough. Lakers star Anthony Davis struggled and exited the game early due to back spasms.

The Clippers ‘ momentum carried over into the second half seizing control as they built a lead as high as 24 points.

With the loss, the Lakers are now a tie for the 7th spot in the West, and potentially could join the play-in tournament if things don’t improve. This isn’t good news for a team trying to get key players James and Davis healthy in time for the playoffs.

Pascal Siakam tied his career-high with 44 points, 11 rebounds, and seven assists in their overtime loss to the Wizards. Unfortunately, his performance was not enough to help the Raptors close the gap between the Chicago Bulls as both are fighting to dethrone the Wizards for the last spot for the play-in tournament.

Dallas Mavericks star Luka Doncic is tied with Dwight Howard with the most number of technical fouls in the NBA. He now has 15, and his one T away from getting a one-game suspension.

“I wasn’t myself this season. I’ve [been] complaining way too much and I got to work on that. I just gotta stay calm and not talk to them. I got to learn from that,” he said in the postgame interview.

Despite his on-court issues, Doncic is still considered a candidate for the MVP award with averages of 28.5 points, 8.1 rebounds, and 8.9 assists. However, the third year All-Star remains humble as he tries to lead the Mavericks to another playoff appearance.

“I’m far from dominating the NBA, I’m far from that. I’m just enjoying every day. I didn’t even imagine I’d ever be here, so this is amazing.”

Russell Westbrook made history yet again by becoming the first player in the league’s history to hit 50 rebounds and 50 assists over a three-game span. His next triple-double will tie Oscar Robertson for the most ever.

2 TRIPLE-DOUBLES FROM THE RECORD!

🔥 @russwest44 (13 PTS, 17 REB, 17 AST) tallies his 180th career triple-double in the @WashWizards win.. his next one ties Oscar Robertson for the most ever. pic.twitter.com/BbP6YMPKze