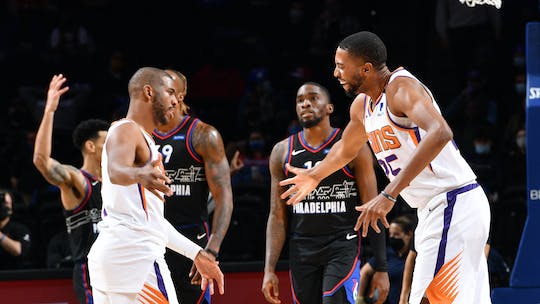 The Phoenix Suns banked on a collective effort to win over the Philadelphia 76ers, 116-113.

The 76ers had multiple key players out with Ben Simmons, Tobias Harris, and Seth Curry all injured. This was no problem for Joel Embiid who dominated all throughout the match, and already had an 18-10 double-double by the end of the first half.

The game was close the entire match, but it was midway through the fourth that things started shaking up. Jevon Carter’s back to back 3s sparked an 8-0 run for the Suns.

Embiid carried the torch and took a few shots to bring the lead down to two possessions with under a minute remaining. But it was Devin Booker who made a game-sealing shot and two important free throws that eventually sealed the game despite struggling all day.

Chris Paul led the Suns with 28 points and eight assists. Booker and Mikal Bridges had 19 and 18, respectively, while Cameron Johnson added 15 points.

Embiid had an outstanding 38 points and 17 rebounds, but did turn the ball over eight times, equal to the entire Suns’ output.

Julius Randle had a spectacular game against the Atlanta Hawks with 40 points, nine of which were in the last six minutes leading up to overtime. He also had 11 rebounds and six assists to lead the Knicks to their eighth consecutive win, which is the franchise’s longest win streak since 2014.


What’s in a number?

100% — Michael Porter Jr. went a perfect 8-of-8 in the first quarter (17 points) of their win over the Portland Trail Blazers.

52 — The number of defensive rebounds the Utah Jazz had against the Houston Rockets.  Rudy Gobert had 15 of them.

27 — Russell Westbrook tallied his 27th triple double of the season with 14 points, 20 rebounds, and 10 assists.

Joel Embiid almost sent the 76ers-Suns game to overtime with this full-court heave. The shot was quickly dubbed as the “best miss” of the season.

Joel Embiid was THIS CLOSE to sending it to OT in incredible fashion. 🤯 pic.twitter.com/gw6eFGiml8