The Rundown: Curry, Green star as Warriors take down Nuggets

Steph Curry and Draymond Green led the attack in the Warriors' win over the Nuggets on Saturday (PHT). 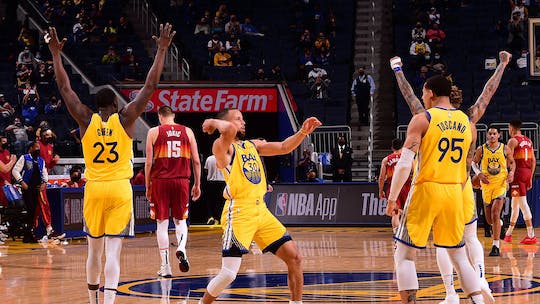 On the day Dub Nation was allowed back into Chase Center, Steph Curry and Draymond Green prepared something special for the fans.

Curry only had seven points at the end of the half, but then turned it up—all the way up—in the second half to lead the Golden State Warriors past the Denver Nuggets.

Green, on the other hand, did the thing that only Draymond Green (and Rajon Rondo) can do, which is dominate the game without scoring much. He scored only two points to go along with a monster 19-assist and 12-rebound game.

The Warriors bench also put on a show for the comeback fans in the arena, with Juan Toscano-Anderson, Kelly Oubre Jr., and Jordan Poole chipping in a combined 47 points.

The Nuggets, hanging on to the fourth spot in West, were obviously missing Jamal Murray against a clicking Warriors squad.

The Warriors improved to a 30-30 win-loss record, still right smack in the middle of the play-in tournament mix. If they keep up this hot streak, whoever they face in that play-in matchup should be worried.

How many times has Russell Westbrook been a big-time baller this season? We’ve lost count.

Just tracking his past 15 games, Westbrook had 13 triple-doubles in those. Look further to 20 games, he had 16. Those games where Westbrook didn’t get a triple-double? Those are the anomalies now.

Against his former team, the Oklahoma City Thunder, Russ dropped a 37-11-11 line to lead his team to a seven-game winning streak.

After a 33-point, 13-assist, zero-turnover game, Ja Morant had a little word of advice to himself:

When @brucebrown11 wants it, he GETS it.


Apologies are in order for Luke Kornet, who was unwittingly dragged into a poster/wallpaper featuring Bruce Brown of the Brooklyn Nets.