Fred VanVleet erupted for a franchise record 54 points for the Toronto Raptors; it's Dame Time as usual for Lillard in Washington. 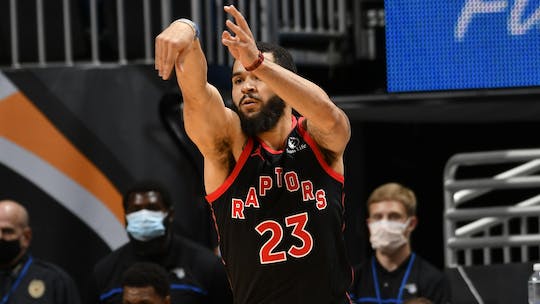 It was one of those soul-crushing plays. Jaylen Brown, a ball of energy for the Boston Celtics, stopped the Golden State Warriors from getting an easy bucket, then—like a burning sphere—zipped all the way to the basket to drop the hammer, giving Boston a 10-point lead in the closing minutes of the fourth quarter.

The game was pretty much close all throughout, but that sequence by Brown gave the Celtics much-needed protection from the flamethrower that is Steph Curry. The Warriors played without James Wiseman, still without Klay Thompson, then lost Kevon Looney to a sprained ankle. It was again up to Curry to drag the Warriors to a W. He almost did it, too. He scored eight straight to cut the Celtics’ lead to four with two minutes left, but Boston—learning from the Brooklyn Nets and the Chicago Bulls—held on for dear life.

Curry finished with 38 points on seven 3s, firing until the very end, soul very much intact. Just goes to show what the Warriors truly need to get back to elite status: more warm bodies.

Toronto Raptors guard Fred VanVleet drained a wide open 3-pointer at the 8:43 mark of the first quarter versus the Orlando Magic to put his team on the scoreboard. Not quite an amazing highlight, but that basket will forever be part of the Fred VanVleet 54-point game mixtape.

Congrats to my brotha Freddy V! Kyle old ass couldn’t do it. Glad you did champ! Been telling you!


There are no lies, from the man who previously held the Raptors’ single-game scoring record of 52 points.

Damian Lillard steps back and fires from WAY downtown to close out the @trailblazers win! pic.twitter.com/YqnXpvW3We


The Portland Trail Blazers were up 11 with over a minute left when Damian Lillard, orbiting outside the 3-point line, casually dribbled further back into a 30-footer and (probably) said under his breath: “It’s time.” The game clock said 1:12, but Dame Time is really the only timekeeping device that mattered here. Lillard, of course, had to check his wrist to see if he’s on schedule. He always is.
Read Next
News