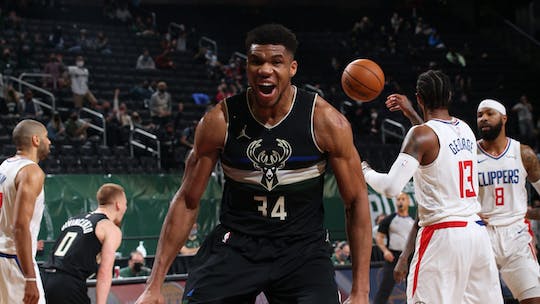 The Milwaukee Bucks may have found a solution to a long-term problem in what might have been the best game of the season so far.

The Los Angeles Clippers came into Milwaukee with the second best record in the West and looked primed to grab their 25th win of the season. Milwaukee had momentum early in the game, but Kawhi Leonard and Paul George took over and kept Los Angeles ahead heading into the fourth quarter. Down 100-96 with over two minutes left, the Bucks went to Giannis.

After a defensive struggle between both teams, Antetokounmpo put the Bucks ahead for good with an emphatic slam.

Giannis ended up scoring seven of Milwaukee's last nine points, dropping 17 of his 36 points in the fourth quarter. Close games like this have been Milwaukee's kryptonite. But if the Greek Freak can make big plays and clutch free throws, he might finally be the closer Milwaukee's been looking for.

Meanwhile in Sacramento, the Charlotte Hornets pulled off a miracle.

The Hornets, who were down by 123-115 with less than two minutes to go, got plenty of help from the Kings who missed five free throws to end the game. Terry Rozier, who was having a horrid night from the field, and PJ Washington, who was having the game of his life, brought Charlotte to within one in the final 10 seconds. After Buddy Hield split his free throws, the Hornets scrambled and found Malik Monk for the win.

MALIK MONK AND-1 WINS IT FOR THE HORNETS 😱 pic.twitter.com/vx31Mo1Rsb

Washington had his best game in the NBA with 42 points. Monk, after floundering in his first two seasons and now looking like he finally found his stride, finished with 21 points.

When St. Louis' best hoopers get together, it’s always a show.

Today, Jayson Tatum got one over his former babysitter Bradley Beal, dropping 31 points on 12-for-22 shooting with eight rebounds, three assists and three steals. He also got this sweet and-1 bucket to seal the win for the Boston Celtics:

Jayson Tatum's TOUGH take WINS it for the @celtics! 🔥 pic.twitter.com/la0nO7eSwt

Beal also had a terrific night with 46 points and seven rebounds. But Tatum's clutch bucket and renewed efficiency puts him over and could be a sign of better days for the Celtics.

Knicks Twitter was ALIVE today with New York earning an 18-17 record. This marked the first time the Knicks entered March with a record above .500 since the 2012-2013 season, the last time they made the playoffs.

Always in-character, Knicks head coach Tom Thibodeau proved that there is no rest for the wicked.

When asked postgame how happy he is with the Knicks record, Coach Thibs responds:
“One, I’m never happy. Two, I always think we can get better.”

Even with Knicks fans already plotting to hang a banner in Madison Square Garden for this occasion, Thibs will never relax.

The Memphis Grizzlies are promising and deep. They flexed that today versus the Houston Rockets, with their bench outscoring the entire Houston squad, 85-84, in what turned out to be the biggest blowout in franchise history.

THEY DID IT!!! The bench ourscored em haha

Memphis wins 133-84. The 49 point win is the biggest in franchise history. Outrageous.

Ja Morant is the face of the Grizzlies, but he has solid support from up-and-down the roster that has kept Memphis right in the thick of the Western Conference playoff race.

Veterans like Tyus Jones, Justice Winslow, and Gorgui Dieng mix well with the Grizzlies young bench core of Brandon Clarke, Xavier Tillman, Desmond Bane and John Konchar. Memphis is only now getting their full lineup healthy, and when they get Jaren Jackson Jr. back, they're primed to make even more noise in the West.