Aaron Gordon scored 13 points in his first game with the Denver Nuggets, while Devin Booker exploded for 35 points in another Suns victory. 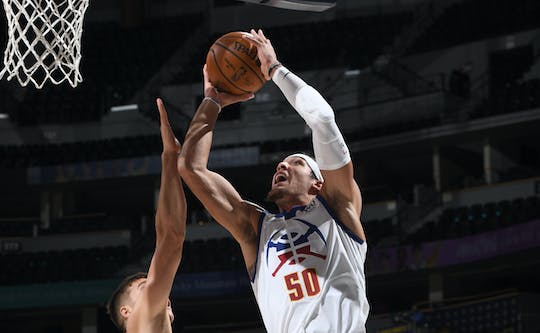 Aaron Gordon, the Denver Nuggets’ prized acquisition at the trade deadline, had an okay debut. He tallied numbers that are just slightly below his season average: 13 points, two rebounds, and two assists in less than 21 minutes of action.

But despite the pedestrian numbers, Denver couldn’t have imagined a better way to start the Gordon era. The versatile forward fit like a glove and made an impact on both ends of the floor. He was running pick-and-rolls, both as the shooter and screener. He also found different ways to affect the game on offense, whether as a lob threat for Nikola Jokic or running backdoor and yamming on the hapless defense of the Atlanta Hawks.

But the Nuggets need Gordon on the defensive end the most, and in that regard, Gordon did an excellent job as well. He helped hold John Collins to only 11 points on 3-9 from the field, and showed the versatility that comes with his athleticism. The best illustration of his presence with the Nuggets can be seen in the lineup of Jokic-Murray-Porter-Gordon: a 92.7 defensive rating, which would make it one of the best in the league if it can hold up.

There will still be an adjustment period for Gordon—every player that moves midseason has to go through it. But it’s clear that he landed on a team that understands his skillset and how it can affect the game. The challenge for Gordon will be whether he can accept being a role player on a team with title dreams. Will he be willing to find his offense off rolls to the rim and backdoor cuts, instead of him handling from top of the key with the ball in his hands? If Gordon accepts that role, then the move could help the Nuggets remain in the upper echelon of the NBA.

We haven't talked about the team in awhile, but here’s your Phoenix Suns update: they’re still really very good. And so is Devin Booker, who led the Suns to 101-97 overtime win against the pesky Charlotte Hornets. Booker had a team high 35 points, and added six rebounds, three assists, and two steals.

Congratulations to @AndreDrummond for signing with the @Lakers and welcome to Los Angeles! Andre is just what the Lakers need; a big man who can score, rebound, and defend.

Despite missing LaMelo Ball, the show goes with the Hornets. And as long as they have Miles Bridges doing this, the show will still be worth the price of admission.