The Rundown: Harden comes up clutch as Nets shock Suns

The Nets hardly missed Kyrie Irving and Kevin Durant as James Harden came through in the clutch to lead them to a comeback win over the Suns. 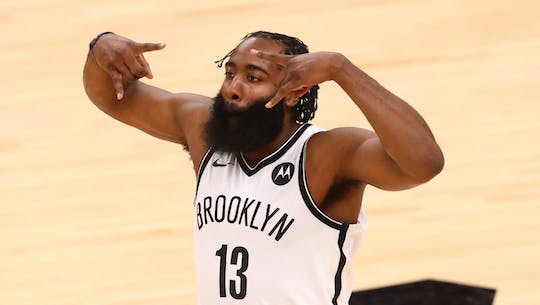 Since he got traded to the Brooklyn Nets, James Harden has played the role of good teammate, unselfish facilitator, and nice teammate. He was getting along so well with his fellow Big Three squadmates, that Kyrie Irving himself proclaimed that Harden should be the lead playmaker. It was going that swimmingly!

The Nets, by all accounts, are the sleeping giants of the NBA. They have an awesome trio that can individually win games on their own, making Brooklyn a terror when the playoffs roll along. But during this stretch of the season, they’re known more for their inability (or lack of interest) to defend at a high level. Teams they should be steamrolling have hung around, because the Nets just can’t get a stop.

But they can get buckets. Man, can they get buckets. Even without Kevin Durant and Irving, the Nets are still in a position to win because of the last remaining superstar on the squad. Harden had to face the surging Phoenix Suns, winners of six straight games, on the road. And it looked grim for the majority of the game, particularly when Phoenix was leading by 24 points at one point. But the former MVP chipped away at the lead, ultimately bringing it down to only 12 by the start of the fourth period.

And then Harden, with a little help from a clutch basket from Jeff Green, took over in the clutch. His 3-pointer, perhaps the most nonchalant big shot of the season, sealed the deal for the Nets on a day when people would have given them a pass for being undermanned. But not with Harden around. For once, we were treated to a vintage performance from “Rockets Harden.” It always won’t happen, but for one day, it was the best show in town.

Every angle of @JHarden13's clutch go-ahead three to complete the @BrooklynNets comeback! 🎥 pic.twitter.com/Y7Bjg4VSGT

There was nothing steady about Fred VanVleet, as he helped the Toronto Raptors to a big win over the Milwaukee Bucks. VanVleet had a team-high 33 points to pace the Raptors, and added seven assists along the way.

You gotta love it when social media accounts of NBA teams acknowledge each other in fun and harmless teasing. But sometimes they can make wholesome content that makes everyone happy. Consider first this tweet from the Chicago Bulls’ Twitter account, as they announced a change in schedule would have them face the Detroit Pistons tomorrow. After well wishes from the Bulls, the Pistons’ Twitter account replied accordingly.

Appreciate it fam, see you soon. 🤝

Can I interest you in some bunnies from Ja Morant?

When you get Zion Williamson (who is on the other team) hyped, you know you did something awesome.