The Atlanta Hawks remained as the hottest team in the league, extending their winning streak to seven games after beating the Oklahoma City Thunder on Friday. 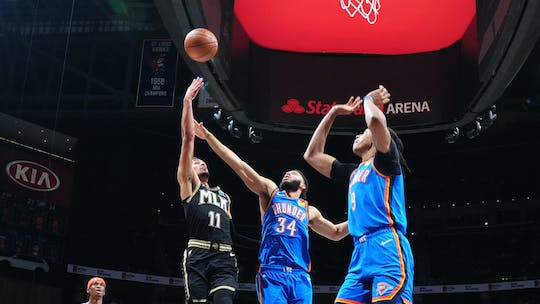 As an avid NBA card collector, one thing that was unanimously clear before the start of the season was the buzz surrounding Atlanta Hawks guard Trae Young and his leap to becoming a bonafide superstar in the NBA. The hype almost became fully realized when the Hawks raced to the top of the Eastern Conference standings early in the season. There were even whispers that Young should be on the shortlist of MVP candidates!

But as with most young players, the prospect rarely amounts to more than potential. Soon enough, the Hawks’ issues—their porous defense, Young’s annoying foul-baiting, chemistry issues with John Collins, and injuries that sidelined Danilo Gallinari and Bogdan Bogdanovic—overwhelmed whatever positivity there was on the basketball court. Soon enough, the Hawks fell out of the top eight, tumbling further and further down the standings.

But the Hawks have found a way to turn it around and are becoming good again.

After the team’s convincing 116-93 win over the Oklahoma City Thunder, the Hawks have now won seven straight games (eight of the last 10), and are unquestionably the hottest team in the NBA.

The Hawks haven’t made any earth-shattering trades. In fact the biggest move the Hawks have made all season long was replacing Lloyd Pearce with Nate McMillan. But that move has indeed favored the Hawks as of late. Their defense has perked up as of late. The chemistry has gotten much better as well, evidenced by off the backboard lobs to Collins from Young.

Trae goes off the window to John Collins in transition! 👀🍿

And above all, with Gallinari and Bogdanovic finally healthy, Atlanta is rounding into the team that many feared: a dynamic, versatile offensive juggernaut with four players capable of bombing away from downtown at all times. The schedule has been favorable for the Hawks as of late, but this is exactly the type of surge Atlanta needs to finally break into the playoffs. Don’t look now, but the Highlight Factory is beginning to percolate once again.

Bradley Beal can still ball and bring the buckets. He scored 43 points on 16-24 from the field to help the Wizards break their losing streak and notch a shocking win over the Western Conference league-leading Utah Jazz, 131-122.

43 points from the league's leading scorer, including 30 in the second half! 🐼🎥#WizJazz | @RealDealBeal23 pic.twitter.com/kUeyKZOhw6

Credit also to Russell Westbrook who registered another triple-double of 35 points, 15 rebounds, and 13 assists, and one and-1 “rock the baby” celebration.

“We get upset when people laugh at us on TV and disrespect us but it's on us to have respect for ourselves and understand that we're not the champions. We are not a team that can just cruise." — Rudy Gobert after the Jazz lost to the 15-25 Washington Wizards

The homecoming was set for Charlotte Hornets rookie LaMelo Ball, who made his first appearance at Staples Center. Ball was impressive, notching 26 points, five rebounds, and seven assists.

But as he’s done over and over again, LeBron James reminded everyone exactly who is the best show in town. This gorgeous spin and dipsy-doo finish in transition was emblematic of a player who has control of every facet of the game.