The Heat were able to secure a win in a finals rematch with the Lakers, while Terry Rozier made a game-winning shot to help the Hornets beat the Warriors. 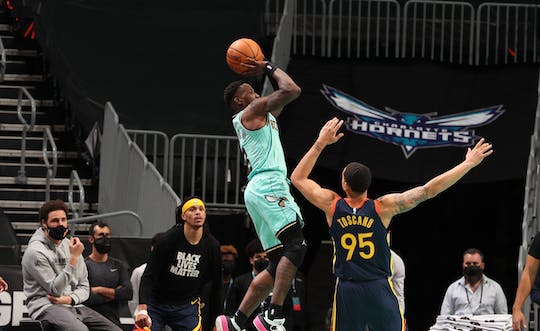 Terry Rozier scored the Hornets' final 10 points, including the buzzer-beating jumper that sealed the win.

The Miami Heat got the best of the Los Angeles Lakers, 96-94, in their first matchup since the NBA Bubble finals.

The Heat had a quick start, showing great ball distribution and hitting 60 percent of their field goals in the opening quarter. Kendrick Nunn led the pack with 15 points, including a perfect 3-of-3 beyond the arc. Miami led by as much as 15 in the first half, but the Lakers’ 3-point shooting helped cut the lead down to seven at halftime.

The Lakers continued connecting beyond the arc, claiming their first lead of the match early in the second half, but Miami soon regained control of the lead.

The back-and-forth continued all throughout the fourth. As the clock was winding down, Jimmy Butler landed big free-throws to make it a two-possession ball game. A quick shot by Wesley Matthews brought the lead down to two, forcing the Heat to call a timeout. When play resumed, LeBron James made a crucial steal but Alex Caruso missed the shot that could’ve saved the Lakers.

Nunn finished with 27 points, while Butler had 24. Duncan Robinson had a double-double with 11 points and 10 assists despite struggling beyond the arc the whole night.

Kyle Kuzma made 23 points, 11 of which were in the opening quarter. James was one rebound and one assist shy of a triple-double (19-9-9). Montrezl Harrell came off the bench with a double-double of 18 points and 10 rebounds.

Terry Rozier led the Charlotte Hornets to a tight win against the Steph Curry-less Golden State Warriors. He dropped some huge buckets, ending the night with 36 points, three rebounds and four assists. He scored 16 points in the final period, including the game-winning shot that sealed it for Charlotte.

“He crossed the line, that’s the main thing.”

Golden State Warriors coach Steve Kerr was disappointed with how one of his veterans acted during a tight game against the Charlotte Hornets. Draymond Green received a double technical foul with less than 10 seconds remaining on the clock which eventually cost the Dubs the game.

Rozier was so hot, his teammates had to cool him off after the game.

Devonte' Graham and PJ Washington cooled Scary Terry off after his game-winner 😭 pic.twitter.com/FtamGLKp95