The Rundown: Kawhi goes off for 45 to push series to Game 7

Kawhi Leonard had an amazing two-way display for the Clippers in Game 6 to avoid elimination. 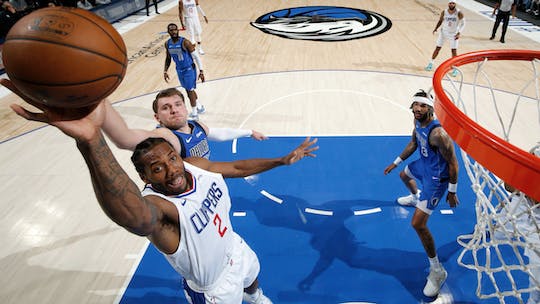 In one of the most exciting playoff games in the first round, the big-time players made the big plays.

Unfortunately for the Dallas Mavericks, the bigger plays in Game 6 went to Kawhi Leonard.

In a crucial, series-saving stretch in the fourth quarter, Kawhi scored eight straight points for the Clippers. He hunted Luka Doncic in every offensive possession and went to work.

The Clippers held on to a two-point lead before Kawhi’s onslaught, and when he was done, Terminator-style, the Clips were up eight with less than two minutes left. And that was it for the Mavs.

Dallas were in it throughout the game, even threatening at times to pull away thanks to the array of ways that Doncic (29 points) and Tim Hardaway Jr. (23 points) can score points.

But when it mattered most, LA Clippers Kawhi channelled his inner Toronto Raptors Kawhi and saved LA’s season. He finished with 45 points, tying his career playoff-high.

Paul George struggled with his shot but still ended up with 20 points, with the big ones also coming in the fourth. Reggie Jackson balled out with 25 points as the only other Clipper in double figures.

Kawhi Leonard (see above). He missed only seven shots in a game where the Clippers’ season was on the line, with all eyes on him to deliver.

Luka Doncic, after a tough battle with Kawhi:

“Kawhi destroyed us. He had a hell of a game. That’s what he does."