The undermanned Lakers lost big to the Nets, but LeBron James reached a historic milestone after surpassing the 35,000-point mark. 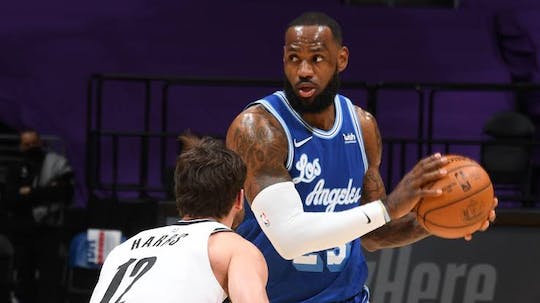 With a free throw in the second quarter, LeBron James became only the third player to score 35,000 points in the NBA, joining legends Kareem Abdul-Jabbar and Karl Malone.

The moment he reached 35,000 pic.twitter.com/DfeCMJabtr

Had the Los Angeles Lakers not been down 20 and had there been fans in Staples Center, this moment would have felt more electric. But, in what has been a frantic season, this is one moment we shouldn't take for granted.

The players LeBron joined in the 35k club were both pictures of consistency and longevity. Kareem towards the end of his career was still vital to the ‘80s Lakers run to five titles, but was significantly slower as he reached 40 years old. Malone, on the other hand, milked every bit of his sweet midrange jumper when his athleticism faded in the early 2000s.

LeBron, in his 18th season, is still dominant and putting up MVP numbers. He's even added a consistent 3-point shot. Reaching 35k for LeBron represents his inevitable climb to the top of the scoring list in two or three seasons. Before we get there, let's savor every bit of greatness LeBron still has left.

The Toronto Raptors have been one of the hottest teams in the league lately and Norman Powell has been a key catalyst.

Playing without starting point guard Kyle Lowry, Powell filled in and hung 29 points on 9-for-12 shooting on the Milwaukee Bucks.

After looking washed to start the season, the Raptors are picking up the pace, even if they’ve had starters like Lowry and OG Anunoby miss significant time and it's thanks to Powell's always-ready-to-drop-20 mentality.

KD's face after Harden hit the 3 was amazing 😂 pic.twitter.com/A5iB33nY0n

KD's bench reactions have been gold all game 🤣 pic.twitter.com/NKcKCqzRxZ

Sitting out the Nets' last three games due to calf strain, Durant has had plenty of reasons to make nasty faces. Another win against the Clippers on Monday gives the Nets a sweep of a tough Pacific Division, giving them plenty of momentum heading into the All-Star game.

The Nets were so good, LeBron immediately had to talk to Anthony Davis about them.

LeBron pulled AD aside to talk things over before the Lakers' loss to the Nets. pic.twitter.com/EnDRe6VD1X

Jimmy Butler and Bam Adebayo took twinning to another level as the Miami Heat's core duo each tallied triple-doubles in a win against the Sacramento Kings.

Apparently, being an all-around threat is a pillar of Heat Culture, right beside 4 a.m. workouts. Miami might need more nights like this from their stars to get into the playoffs, since they only have a 12-17 record.