Luka Doncic made an off-balance 3 at the buzzer to lift Dallas past Memphis, while Philadelphia was able to survive a late rally from Brooklyn to snag the win. 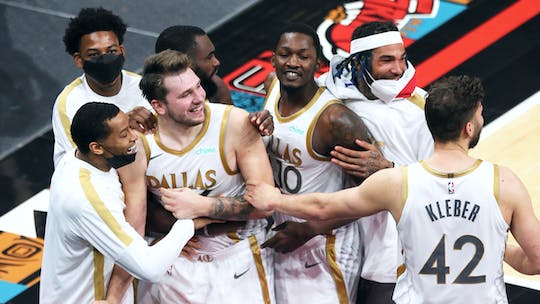 By the power of Bruce Brown, the Nets just wouldn't give up.

Playing in Philadelphia in front of a Wrestlemania-level crowd, Brooklyn – without KD and James Harden – was struggling to contain the healthy 76ers and their World Heavyweight Champion Joel Embiid. Down 22 with 8:13 left in the fourth quarter, Steve Nash pulled out Kyrie Irving, waving the proverbial white flag.

Brooklyn got within three points of the Sixers, before Philly finally put the game away in the last minute. The Sixers won, but not without driving Doc Rivers' and their rowdy crowds' stress levels to the limit. Every matchup is a rivalry with Embiid's WWE Superstar level of promoting matchups. The Sixers are legit title contenders this year, but this Nets team has been unstoppable when all three of their stars are healthy. One has to wonder what type of message it sends when you mount a comeback behind your second and third stringers.

The Grizzlies had the Mavericks pinned, leading 111-106 with 1:16 to go in the game. The Mavericks found consecutive stops and buckets to get within two, 113-111. That's when the Grizzlies made two crucial mistakes.

The first error fell on Grayson Allen, who shot 91 percent from the free throw line this season, missing two charities. The next was leaving 1.8 seconds on the clock, just enough time for the Wonder Kid to conjure a bucket.

Luka Doncic beats the trap, puts up the floater from behind the arc and knocks down the #TissotBuzzerBeater to lift the @dallasmavs! #ThisIsYourTime pic.twitter.com/eOqyEGMg7T


Doncic has broken many hearts this season. This one against the Grizzlies – heaving a shot from deep with two defenders draped on him, while he was stumbling – has to sting the most.

The win gives the Mavs a 30-24 record, 2.5 games ahead of the Grizzlies for the seventh seed.

They’re far from their 73-9 2016 glory days, but today we got a reminder of just how dominant the Warriors can be when Steph Curry finds his groove.

That perfect third quarter had Steph finish with 42 points with 11 3s, eights assists and six rebounds. He did that all in just 29 minutes, sitting out the entire fourth quarter.

They’re still hanging on to a play-in spot, but it's always nice to get a reminder of just how dangerous the Warriors can be.

No Kawhi. No PG. Luckily, the Clippers had Reggie.

Facing his former team, Reggie Jackson first did a Miller, tying the game with a 3. Then he did a Michael, ending the thriller in style.

We never really know how much a city means to these players. On the outside, we see Reggie Jackson playing against a team he spent six seasons on. For Reggie, he’s coming home every time he goes back to Detroit.