The Rundown: Mavericks clinch No. 5 seed after beating Wizards

Luka Doncic posted a triple-double of 31 points, 20 assists, and 12 rebounds, leading the Mavericks to a third straight win that pushed them up to fifth place. 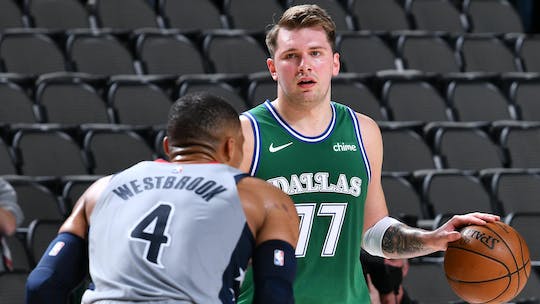 The Dallas Mavericks bumped up to the No. 5 seed in the West after a win against the Washington Wizards, 125-124.

The Mavericks started hot despite not having Kristaps Porzingis on the court. They were hitting shots and playing outstanding defense, limiting the Wizards to 36 percent from the field. Luka Doncic pushed the lead up to 14 points after scoring 13 points, four rebounds, and six assists in the opening quarter.

However, just as Dallas thought they got the game, Washington made a late 9-3 run to cut the lead down by five at the end of the first half.

After the break, Russell Westbrook picked up where they left off and created some distance for the Wizards.

The Mavericks eventually got some footing in the fourth quarter. They cut the eight-point lead down to two, thanks to Tim Hardaway Jr.'s 4-of-4 to start the fourth. A back-and-forth action between the two teams ensued until crunch time.

The game was tied with less than a minute on the clock and the lead kept switching per possession. Dorian Finney-Smith said enough was enough and hit a cold-blooded 3 which gave the Mavericks the victory.

Doncic got his first triple-double since March 15 after posting 31 points, 12 rebounds, and a career-high 20 assists. Finney-Smith also had a big game with 22 points, five rebounds, and two assists. Maxi Kleber and Hardaway Jr. had 17 and 16 points, respectively.

Westbrook was shy of another triple-double with 42 points, 10 rebounds, and nine assists, while Bradley Beal scored 29. Rui Hachimura was the only other Wizard in double figures with 18 points.

Washington’s loss not only put their winning streak to a halt, but it also gives the Toronto Raptors and the Chicago Bulls a chance to clinch the last play-in spot. Both teams are about two games behind the Wizards, putting Washington’s position at risk.

Lonzo Ball showed he’s a big baller with his performance against the Minnesota Timberwolves. He had a career-high 33 points and tied his peak of eight made 3s. He also added 11 rebounds and eight assists in their overtime win.

Lonzo takes OVER for NOP. #WontBowDown

“I never played basketball to win individual awards… If it happens, it happens. I don’t play for that.”

Despite being the frontrunner, Nikola Jokic doesn’t really care if he wins the MVP or not. What truly matters to him is winning the championship and focusing on the road to get there.

However, he does not take credit for their success even if he’s leading the pack in almost every aspect. The key to winning is not him, it’s the whole Denver Nuggets.

“Together,” he says. “It’s not one guy. Nobody can win a championship or a game by [themselves]. So, I think togetherness is something that keeps us winning our games.”