With Kevin Durant back in the lineup, the Brooklyn Nets dominated the New Orleans Pelicans, 139-111, on Thursday. 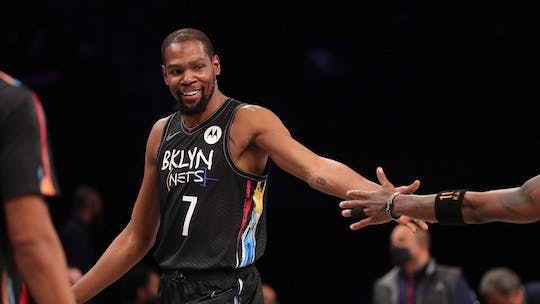 Kevin Durant had 17-7-5 in his first game back for the Nets.
Scoreboard

New Orleans Pelicans’ Lonzo Ball found himself alone on an island. He was guarding Kevin Durant, who made his return to the Brooklyn Nets lineup for his first game since February 13, in the post. All by himself, with no help coming.

See, the reason no one could help Ball was because of the Nets’ lineup on the floor. Durant was flanked by LaMarcus Aldridge, Jeff Green, Joe Harris, and Kyrie Irving. Amongst those five, Aldridge has the lowest shooting percentage from the 3-point area at 38.8 percent, which is way above league average. All four of them were at the 3-point line, spacing the floor.

Steven Adams began to lumber towards Durant, which proved to be the fatal first step. With Adams committing to Durant, KD flipped the ball to the weak side corner where Aldridge was waiting. Immediately the defense bent towards him, and Aldridge reacted by flipping the ball to the elbow to the waiting Green, who then swung the ball to Irving at the top of the key. Irving moved it back to Durant who had relocated to the elbow. An extra pass from Durant to Harris in the corner moved the ball from Aldridge on the opposite corner all the way to Harris in the strong corner.

At this point, you almost feel sorry for the Pelicans. They were scrambling all possession long, trying to stay in front of each Net. But with a team with the firepower of the Nets, it was only a matter of time. Harris penetrated the paint and took advantage of the defense that darted towards him. And with a heads-up play, he found Aldridge cutting to the paint and fed him for an easy dunk.

Around the (Nets) World and back again 🌎 pic.twitter.com/f3kml2iyAO

It was just a small example of the devastating firepower at the disposal of coach Steve Nash. With Durant back in the mix, the Nets are slowly coming together and realizing their full potential. Even though they did not have James Harden available, they already looked unstoppable at times on the floor.

Durant, already an unstoppable cheat code on offense, is going to make the Nets even more dangerous. And we thought that they couldn’t fly any higher.

Devin Booker simply would not be denied. He led his Phoenix Suns squad to an impressive overtime victory against the league-leading Utah Jazz, tallying 35 points to go along with four rebounds and three assists.

“One thing about this team - we never quit fighting. I love the group of guys I play with.” — John Wall talking about the adversity the Houston Rockets, who scored a big win over the Dallas Mavericks, has faced all season long.