The Nuggets got a win over the Mavericks minus Nikola Jokic and Klay Thompson went for 41 in the Warriors’ first road win. 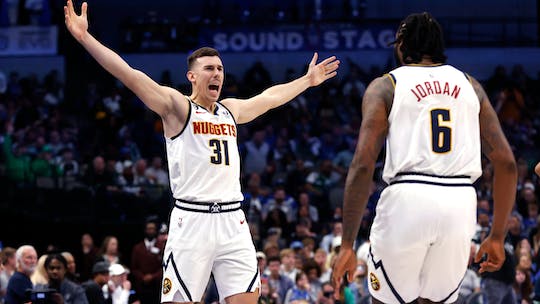 The Denver Nuggets have been trying to survive this little stretch of games without their MVP Nikola Jokic, but what they did was thrive.

Against the Dallas Mavericks, the Nuggets matched the scoring firepower of Luka Doncic with their own Bones Hyland, who scored a career-high 29 points off the bench.

Hyland got help from Michael Porter Jr. (14 points) and Bruce Brown (12 points). Biggest help came from the most unexpected places in the form of Vlatko Cancar, who hit a halfcourt shot to end the first half, but he scored it at the start of the second half. It was a quite confusing few minutes as Luka Doncic’s own buzzer-beater at the half was nullified after a review, opening the door for Cancar to hit the halfcourt heave.

Doncic scored 22 points for the Mavericks but the other Slovenian got the win.

De’Aaron Fox exploded for another 30-point game for another Kings win. Fox has been so good this season because it’s just not about getting the buckets—he’s getting them at a highly efficient rate.

Against the Pistons, Fox scored 33 points at 61-percent clip. He also shot perfect from the line and added seven assists. This big-time baller has led the Kings to six straight wins, their longest win streak ever since 2005.

The Warriors, on the other hand, haven’t been winning a lot of games, and Klay Thompson shot as if he wanted to change that ASAP. Thompson splashed 10 3s against the Rockets, missing only three of his 3-point attempts. He finished with a season-high 41 points in the win.

Anthony Davis continues to carry the Lakers scoring load with LeBron James sidelined, dropping 30 points and grabbing 18 rebounds on the San Antonio Spurs. AD will need to have more than a functioning back to lift his team to a decent win-loss record without James.

The Nets got Kyrie Irving back and got a W in the process. Here’s what Nets head coach Jacque Vaughn had this to say after the victory:

Weirder things have happened in the league, sure, but this should definitely be on the list.

What hurts is that the Nuggets won by a point.

one of the weirdest plays of the season happened tonight: Luka hits a 3 at halftime buzzer, but since it was at buzzer it has to be reviewed.

the refs rule him out of bounds. so after halftime ends and before 3Q starts, they put 2 seconds back on the 2Q clock.

The Rundown: Wiggins explodes for 36 to help beat down Rockets

Andrew Wiggins led the way for the Dubs last night with an impressive 36-point performance.