The Rundown: Nuggets slip past Clippers for fourth straight win

Behind Jamal Murray and Michael Porter Jr., the Denver Nuggets were able to avenge their Christmas Day loss to the LA Clippers. 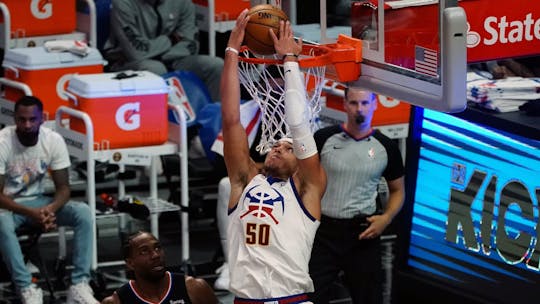 Despite Nikola Jokic struggling the whole game, the Denver Nuggets managed to beat the Los Angeles Clippers, 101-94, on Friday (PHT).

Jokic finished with only 14 points, seven rebounds, and seven assists. He only made six shots and didn’t have any free throws.

Denver took charge from the jump to create some distance. Will Barton led the pack with 10 of his 19 points in the first quarter alone. Their performance on both ends of the court was spot on, limiting Paul George and Kawhi Leonard to 19 combined points at the half. The Nuggets’ momentum carried throughout the game as they led by as much as 18. The Clippers made several runs, but just couldn’t overtake Denver. The Nuggets made more than half of their 3-point attempts and tallied 28 assists.

Kawhi Leonard gave the Clippers another double-double with 24 points and 12 rebounds, while Paul George had 17 points and eight rebounds. Terance Mann, who lately has seen a steady incline in his performance, had 18 points, six rebounds, and two assists.

Since the Aaron Gordon trade, Denver has won four in a row and 13 of their 16 games.

Nickeil Alexander-Walker was close to topping his career high, exploding for 31 points, to go along with eight rebounds and three assists. His confidence was through the roof as he started for the New Orleans Pelicans for the sixth straight game.

After the Nuggets’ win, Dwayne Wade asked Aaron Gordon why he chose to wear No. 50 with his new team. His answer:

“You know I got the most 50's in the Dunk Contest.”@Double0AG tells @DwyaneWade why he wears No. 50 in Denver 😂😭 pic.twitter.com/5MNxgZal38

Jimmy Butler, who helped the Miami Heat win their third straight game, was a little less serious when he did his post-game media session.

Bam did not approve 🤣 pic.twitter.com/MPqBXgSJt1