Damian Lillard's historic 55-10 performance was not enough for the Blazers to win in Game 5. The Nets toppled the Celtics in five games to set a semis date with the Bucks. 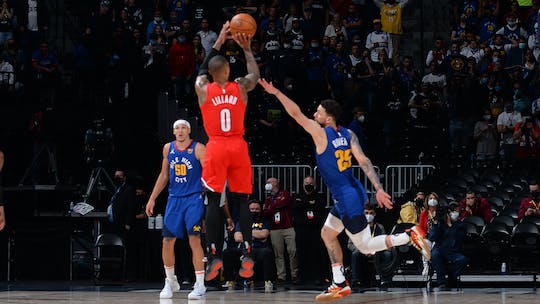 Dame Time is fun no matter when it happens, but Playoff Dame Time is truly marvelous. In any other game against any other opponent, the Denver Nuggets’ four-point lead with less than a minute to go would have been enough to comfortably seal Game 5.

But this is Damian Lillard, the 100 emoji come to life who doesn't care about the odds.

The Portland Trail Blazers have long ridden on Lillard's back to some incredible playoff moments. Game 5 might have been his masterpiece. Later on, Lillard would drill another triple to send the game to a second overtime, proving that Dame Time cares not for our scheduled lunches or meetings. We have no choice but to watch.

LILLARD BURIES IT TO GET TO 50 POINTS AND FORCE DOUBLE OT ON NBA TV! 🚨 pic.twitter.com/z4fnJXSRGE

The most incredible fact from this is how the Nuggets still won. Lillard dropped 55 points and a playoff record 12 3s. Denver grabbed Game 5 and drew closer to the Western Conference semifinals. Damian Lillard will rightly draw all the headlines and appreciation tweets, although Denver deserves the same appreciation just for surviving it.

Amidst all the playoff hype from their New York neighbors, the Brooklyn Nets low-key dominated their series against the Boston Celtics. In the series-clinching Game 5, it was James Harden's turn to slightly outshine his two fellow superstars, dropping a 34-10-10 triple-double.

James Harden has a Triple-Double of 34 PTS, 10 REB, 10 AST for the @BrooklynNets! #NBAPlayoffs pic.twitter.com/WCQWZbSEAQ

The Nets move on to face the Milwaukee Bucks in the second round. Given how their trio almost nonchalantly cruised past the Celtics, the Nets should have the upper hand against Giannis and the Bucks.

The defending champs are on the ropes. Without Anthony Davis, the Los Angeles Lakers suffered a 30-point romping against the Phoenix Suns. The game was never close. LeBron James, no stranger to being down 2-3 in the playoffs, is keeping a calm façade while everything seems to be burning around him.

Expanded on tonight’s game: "They’re kicking our ass, but at the end of the day it’s 1 game … they held serve at home, we go home with the opportunity to (return serve)."

There’s a good chance that you, the reader of an article from NBA dot com, has never had to guard anyone like Damian Lillard.

This reaction from Austin Rivers is as close as we can get to understanding the feeling. When your closeout isn't working, it's probably time to open your heart to the Lord.