Julius Randle and the Knicks took care of Zion Williamson and the Pelicans, while Bam Adebayo hit a buzzer-beater to lift the Heat past the Nets. 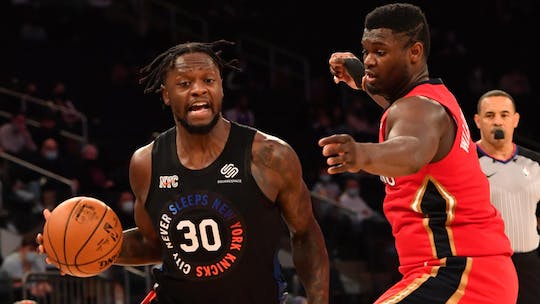 Zion Williamson made his first trip to the Madison Square Garden as a pro and there are so many things to unpack.

Let’s start with the game. The New York Knicks and the New Orleans Pelicans pretty much cancelled each other out that by the time the fourth quarter buzzer buzzed, the score was tied at 103. The Pelicans nearly had it, but a clutch 3 by Reggie Bullock in the corner (off a perfect Derrick Rose orchestration) sent the game to overtime.

In extra time, it was all Knicks. Julius Randle was still the force that kept it steady for New York, securing rebounds and setting his teammates up for easy baskets. He finished with another astounding 33 points, 10 assists, five rebounds, and five steals.


The Knicks have won now six straight and are tied with Boston for the fifth spot in the East with a 18-10 win-loss record.

Back to Zion. He put up Randle-like numbers with 34 points, nine rebounds, and five assists. It’s been a tough mini-stretch for the Pelicans, having lost two straight games in overtime.

Post-game, however, Zion was all smiles when asked about his experience playing in New York.

“New York is the Mecca of basketball. I love playing here,” he said. “Outside of New Orleans, this might be my favorite place to play in.”

We’ll have to wait until next season to see Zion back in New York. He might have another big game in the bag for that one.

The Toronto Raptors have been a fun watch partly because of their relentless drive to join the playoff mix. Mostly, it’s because of Chris Boucher.

After a career game earlier this month (38 points and 19 rebounds), Boucher dropped another huge line, this time against the Oklahoma City Thunder.

He scored 31 points on a career-high six 3s and grabbed 11 rebounds in a much-needed win. He became the first Raptor since 1997 to drop a stat line like that.

?? @chrisboucher was dialed in from deep during the @Raptors victory!


The Raptors are still within the realm of the play-in tournament, which makes their remaining games essentially all must-wins.

Thunder’s Lu Dort's threatened with a career game of his own, hitting all five of his 3s in the first quarter. The Raptors contained the potential explosion, and Dort ended with 29 points.

Brooklyn Nets head coach Steve Nash on losing Kevin Durant to another injury in the first quarter of the Miami Heat game:

“We're kind of used to it now. We've had a lot thrown at us, different lineups. We miss Kevin dearly, but we've been able to scrap and adapt this year, and other guys will get an opportunity."


Ballgame tied in the closing seconds, Bam Adebayo had the ball, faced up against Jeff Green. He briefly glanced at the clock and went to work with only three seconds left. Three dribbles plus a little shoulder bump, that’s all it took for Bam to rise up for the buzzer-beating game-winner.

It was the first of its kind for the Miami Heat since Dwyane Wade hit one in 2019. After the game, Adebayo said he wanted to do the whole scorer’s table celebration, D-Wade style, but then decided against it. Perhaps on the next Bam game-winner.
Read Next
Feature