After halting the Suns’ 18-game streak, the Warriors saw their own home streak come to an end with a loss to the Spurs. 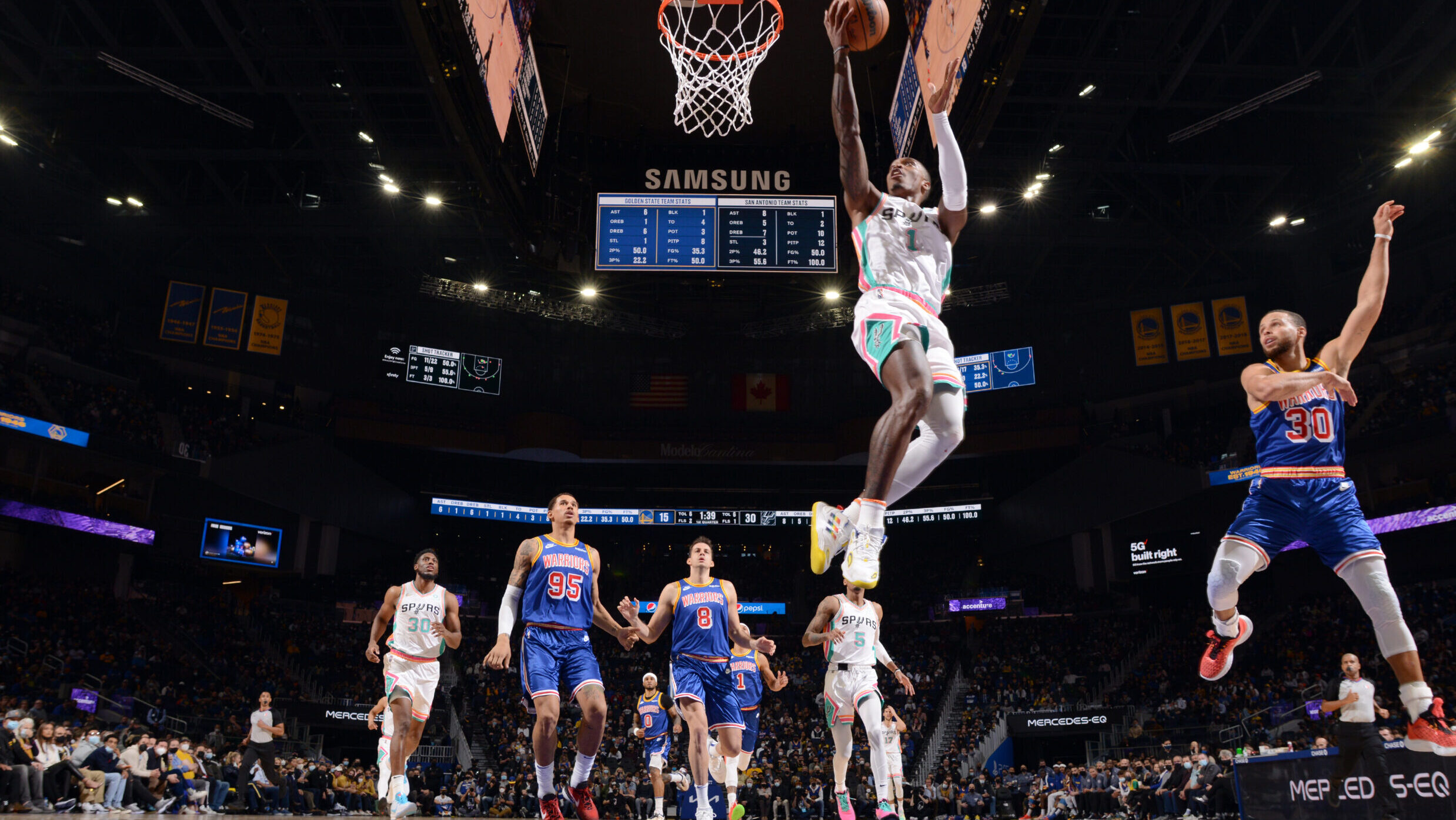 If there’s any ominous sign that teams facing the Golden State Warriors on their home court don’t want to see pregame, it’s this:

Steph... FROM THE STANDS 😱@warriors host the Spurs at 8:30pm/et on NBA League Pass: https://t.co/V0kkYEEIkG pic.twitter.com/B5dNfaOLSx

Good thing the shot didn’t count. Steph Curry started the game against the San Antonio Spurs trying to find his stroke and missing his first nine shots. He went 1-of-11 in the first half, which looks more like Stranger Things than an NBA stat.

The Spurs led by as many as 22 points and were still up by 19 late in the third quarter. Curry finally got it going in the fourth, and the Warriors took over with two and a half minutes left via – you guessed it – a Curry 3.

The Spurs held their own though. Despite the awakened Chase Center crowd, Dejounte Murray (23 points) and Derrick White (25 points) scored clutch baskets to keep the Warriors at bay (pun intended).

Curry finished with a game-high 27 points, but missed 12 of his 17 3s. He didn’t get much help from Andrew Wiggins and Jordan Poole, who combined for only 26 points.

The Spurs are on a hot streak, getting four straight wins while ending the Warriors’ 11-game home winning streak.

In the East, the Chicago Bulls did their part in closing the gap between themselves and the conference leader Brooklyn Nets.

Zach LaVine and DeMar DeRozan combined for 60 points because that’s what you need to do to beat a team like the Nets.

The game was close all throughout. It took a Lonzo Ball 3 with 16 seconds left to give the Bulls a five-point lead, enough to make life difficult for the Nets.

The Nets still hold first place in the Eastern Conference with a 16-7 win-loss record. Breathing down their necks are the Bulls at 16-8.

The Denver Nuggets aren’t having a spectacular season (11-11). They started without Jamal Murray and then lost Michael Porter Jr. for the season.

The burden of carrying the Nuggets to the fringes of the playoffs lie on the broad, menacing shoulders of Nikola Jokic — as Markieff Morris unfortunately found out.

Each and every time, Jokic delivered. Against the New York Knicks, the reigning MVP put up MVP numbers: 32 points, 11 rebounds, and five assists. What’s crazy about this performance is that he only missed a total of five shots.

The recurring problem for the Nuggets this season is finding help for Jokic, who might be worn out before the year ends. Then again, with games like this one, he constantly reminds us that he’s from Serbia, brother.

Other greats stats for fantasy nerds:

Spurs head coach Gregg Popovich always has all the right answers. This is his response when asked about the Spurs’ defense on Steph Curry, who shot 7-of-28 for the night:

The Milwaukee Bucks gave off a warm vibe for PJ Tucker’s ring night. It’s moments like this that get you:

"The dogs are back together!"

P.J. Tucker gives a speech to the Milwaukee fans as he receives his championship ring!@MiamiHEAT and @Bucks on NBA League Pass: https://t.co/V0kkYEEIkG pic.twitter.com/sEB0VA0KV2

The warmth wore off as soon as the game started though as the Bucks trampled the Heat by 22 points.