Jayson Tatum unleashed a 50-point game for the Boston Celtics, who secured the 7th seed in the East playoff picture. 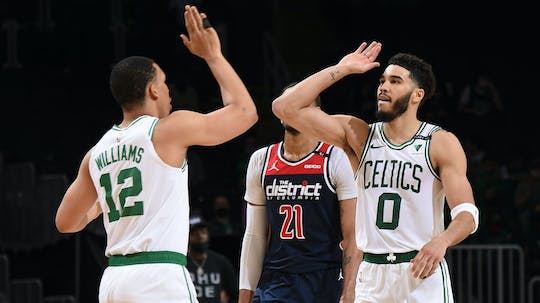 The playoffs always brings something special out of Boston Celtics star Jayson Tatum.

The regular season was a slog for the Celtics. They battled COVID-related absences and injuries to key players for the duration of their first 72 games. They also lost All-Star Jaylen Brown, who is out for the remainder of the season.

Tatum has had to carry a heavy load all season long. He admitted that he’s still dealing with COVID-related symptoms, and is still trying to find the consistency that has made him such a stud since he entered the league.

The lights shine brighter in the playoffs. But instead of shrinking, Tatum shines brighter. Against the Washington Wizards, Tatum tallied a game-high 50 points to lead the undermanned Celtics to a 118-100 win and the seventh seed in the East. As a result, the Celtics have set up a date with the second-seeded Brooklyn Nets

Tatum started out slow, with only 17 points at the half. But with Boston needing a spark to hold off Russell Westbrook and Bradley Beal, he answered the call and absolutely put on a show. Kemba Walker was also big time, as he finished with 29 points, seven rebound, and two steals.

The Wizards, on the other hand, dropped into a must-win battle against the Indiana Pacers, who defeated the Charlotte Hornets in dominating fashion, 144-117. Playing already without Caris LeVert and Myles Turner, the Pacers showed their playoff experience by relying on Domantas Sabonis who produced a near-triple double of 14 points, 21 rebounds, and nine assists. The Pacers also got tremendous performances from Oshae Brissett and Doug McDermott, who tallied 23 and 21 points, respectively.

He may not be a household name yet, but that’s what the playoffs can do for you. The Pacers’ Oshae Brissett was undrafted in the 2019 NBA Draft and is one of those underdogs that NBA basketball nerds will always root for. He embraced the opportunity with the shorthanded Pacers by notching 23 points on 10/14 shooting along with five rebounds and two assists.

Jayson Tatum on his battle with friend Bradley Beal of the Washington Wizards.

“I didn’t want to lose to Brad.” @jaytatum0 talks playing against his friend and fellow St. Louis native @RealDealBeal23. pic.twitter.com/eg181ytqJW

The Wizards may have been denied the seventh seed, but they still have one more chance to make the postseason.

They’re right where they want to be: underdogs that are counted out by many. Let’s see if Beal and Brodie can rise to the occasion once again, like how Beal elevated for this gorgeous jam.

Watch #StateFarmPlayIn WIN TO GET IN action on TNT pic.twitter.com/Eer3rKGUoz