Russell Westbrook tied Oscar Robertson's record of 181 triple-doubles in the Wizards' win over Pacers, while Stephen Curry torched the hoop with 11 3s for 49 points in only three quarters. 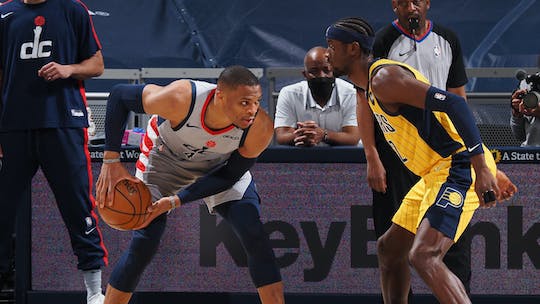 Russell Westbrook ended up with the ball at the end of overtime, as the Washington Wizards snatched the win from the Indiana Pacers, 133-132.

Westbrook wanted it. Westbrook deserved it. It was a fitting ending to a historic game where he tied Oscar Robertson’s 181 triple-doubles, the most in NBA history. He will get a couple more before the season ends.

The Pacers had their own moments, like when Domantas Sabonis did everything and led his team with 30 points, 13 rebounds, and 13 assists. Or when Caris LeVert did even more and ended up with 35 points and 14 rebounds. Or when Goga Bitadze blocked Robin Lopez twice in one play.

But Westbrook is too neck-deep in chasing history that nothing can stand in his way. Sure, he missed the game-winning try at the end of regulation, but that’s just part of the Russell Westbrook Experience. He also shot 11-of-26 from the field, but that’s what Bradley Beal (50 points on 19-of-31 FGs) is for.

In overtime, Westbrook hit two clutch, go-ahead free throws before his game-winning block on LeVert at the buzzer.

Westbrook went for it from tipoff, tied the Big O record by the third quarter, then focused all his energy in making sure the Wizards got the win. He wanted it. He deserved it.

Someone should tell Steph Curry it’s no longer the month of April.

After a wild run last month, Curry is continuing the hot streak with another scorching feat: 49 points and 11 3s in only three quarters.

Wins are hard to come by now that the play-in tournament is inching closer. Expect Steph to turn it up a notch. What a weird concept.

Steph when asked what he thinks about a possible Warriors-Lakers play-in matchup:

A couple of posters and too many 3s for one game day, but what shouldn’t go unnoticed is this move from CJ McCollum: