The Wizards easily got past the Pacers to book the final playoff spot in the East, securing a date with the top-seeded Sixers. 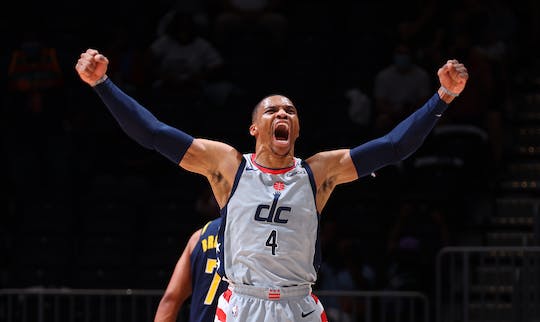 The Indiana Pacers kept it close for much of the first quarter and early second quarter, but didn't put up a fight for the rest of the game.

The Washington Wizards used a 16-0 second quarter run to overwhelm the Indiana Pacers and secure the eighth seed in the Eastern Conference Playoffs. Indiana seemed ready for the Bradley Beal-Russell Westbrook assault to start the game, but poor transition defense caught up to them in the second quarter and they were never able to adjust.

The Wizards, to their credit, never stopped coming at the Pacers, eventually building a 35-point lead in the fourth quarter with both their stars on the bench. Most teams would have relinquished a run at some point that trimmed their lead, but Washington’s bench pulled through for the easy win.

The Pacers ended their season on a whimper. Most of their rotation players like TJ Warren, Caris LeVert, Jeremy Lamb, and Myles Turner have spent significant time on the shelf recovering from injuries. Though Malcolm Brogdon and Domantas Sabonis have carried the Pacers to a play-in berth, the writing was on the wall for this Indiana team when reports of turmoil between the players and head coach Nate Bjorkgren surfaced last April.

The Wizards, on the other hand, get a date with the top overall seed Philadelphia 76ers. Philly won all three games of their season series, but those games came before the Wizards' recent hot streak.

It's been tough to watch Bradley Beal over the last week try to play through a hamstring injury. Being the soldier that he is, he hasn't made any excuses and still provided the Wizards big time production with their season on the line. Beal poured in 25 points on 9-for-17 shooting with five rebounds and four assists.

Westbrook had a nice game as well, tallying 18 points, 14 assists, and eight rebounds. Not quite a triple-double, but Brodie will take the blowout win.

All season, this duo was tested and even questioned for having testy chemistry at the start, but just look at them now.

BRODIE AND BEAL.
DOING THEIR THING.#StateFarmPlayIn WIN TO GET IN to the #NBAPlayoffs.

We get a lot of different Brodies throughout the course of a season; from Candid Brodie to Angry Brodie. The few times Happy Brodie appears are always the best.

“I just wanted to thank you for letting us down.” 😂

Russ explained the hardest part of getting a triple-double... AND Chuck called him out after he came up short in the Wizards' win. pic.twitter.com/TXr9Kyu1df

The NBA announced the finalists for the regular season awards.

Interestingly, the Utah Jazz have both Jordan Clarkson and Joe Ingles up as contenders for the Sixth Man of the Year Award. Clarkson has played the traditional Jamal Crawford/Lou Williams role of scorer off the bench while Ingles has provided more of a playmaking presence for the Jazz's second unit. Think of Ingles as Lamar Odom, but Australian and a bit slower.


The Rookie of the Year ballot should also produce quite a stir. LaMelo Ball had the award locked up until a wrist injury forced him to miss over a month of action. Anthony Edwards started off slow, but picked up the pace in the last two months of the season. Tyrese Haliburton, meanwhile, was consistent when he got minutes. A late season injury to De’Aaron Fox gave Haliburton’s stats a boost. This should be one of the tighter races among the awards.

The best news is the NBA doing away with the awards show they’ve held over the last few years that delayed the announcement of awards until the end of the Finals. With them announcing awards throughout the playoffs, we should get more storylines as the awardees clash.
Read Next
News

The NBA will play its usual 82-game, October-to-June schedule after two pandemic-shortened seasons.