The Milwaukee Bucks and Phoenix Suns are now tied at 2-2. Here’s what we learned from Game 4. 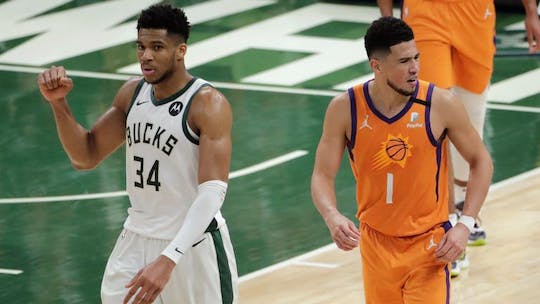 After three blowouts, this year's NBA Finals had its first classic in Game 4. Through all the tension of the first three quarters and a wild last four minutes of the game, the Milwaukee Bucks walked away with the series tied at 2-2, turning the finals into a virtual best-of-three. Have the Bucks swung momentum permanently to their side? What happened to the Phoenix Suns?

After Giannis Antetokounmpo punked their interior defense for back-to-back 40-point games, the Suns executed a solid game plan to limit the two-time MVP in Game 4. First, Deandre Ayton stayed out of foul trouble. Ayton got his third foul very early in the first half of Game 3 and was limited to just 24 minutes, allowing Giannis to thrive without Phoenix's best defensive option on him.

Not only did he stay out of foul trouble, but Ayton also did well in Phoenix's adjustment of meeting Giannis higher on the court when he gets the ball to limit his room to accelerate to the rim. Coupled with more double-teams and an inevitable return to form from the free throw line from Giannis, you'd think Giannis had a pretty unremarkable game.

Until you look at the stats sheet and see he had 26 points on 11-for-19 shooting with 14 rebounds, eight assists, three steals, and two blocks – including the one which could go down in history as the freakiest block ever.


Consistency is what separates stars from superstars. Giannis is a rare breed of player that can affect any game in multiple ways like Hakeem Olajuwon. He didn't score 40, but he still had a great game thanks to his will, helping the team in any way he can. Aside from the crucial block, Giannis assisted on a big Pat Connaughton triple in the last two minutes and got an offensive rebound to follow-up a missed Jrue Holiday layup in transition to trim Phoenix's lead. He may not have a lot of buzzer-beating jumpers ala Michael Jordan, but Giannis will always find a way to win.

There’s no hiding it: Jrue Holiday has been atrocious as an offensive player for much of this postseason, especially in the Finals. In Game 4, Holiday went four-for-20 from the field for 13 points. Some of his misses were ugly, air-balling layups and missing the rim on jumpers by a good couple of feet. There's a lot to admire with Holiday’s tenacity to still take 20 shots, despite his field-goal percentage. At some point, he has to be better offensively so he doesn’t actively hurt Milwaukee’s chances this series.

There's no hiding it: Chris Paul has been out of sorts the last two games because of Holiday. For all his offensive shortcomings, Holiday makes up for it on defense. Paul is the perfect target for Holiday. Physically, Holiday can match Paul's quickness and strength to bother him consistently. Mentally, Holiday lives for these defensive chess matches of trying to outsmart great players like Paul.


CP3 will make the Hall of Fame one day and they for sure won't show any footage from the last two games in his highlight reel. Holiday has figured out Paul, picking him up almost from the inbound and prodding for steals. Once Paul gets the ball up the court, he has around 15 seconds left to run a play, way less than what is ideal. When Paul does try to make a play, Holiday is there either bothering his shot or making his passes difficult. For a gifted game manager like Paul, making sure his team gets a shot off is what makes him brilliant. Take that away and he's lost. Paul had five turnovers in Game 4, including a crucial fumble in the final minute that sealed the game.

It'll be interesting to see how Paul adjusts for Game 5. So far, Holiday has had his number.

The One Where Booker Fouled Out

For as great a performance as Giannis or Khris Middleton (40 points) had, Game 4 will be remembered as the Devin Booker game.

Sure, he had one of the best offensive games of his career on the biggest stage in basketball. He had 38 points by the end of the third quarter and looked like he was easily going to score 50 by the end of the game. He only finished with 42, which is still a lot of points. But we won't remember that.

What we’ll remember is one of the most egregious, dumbfounding no-calls in NBA history. Caught in a 2-on-1 fastbreak with around four minutes to go in the fourth quarter, Booker opted to smother Holiday’s layup attempt – appearing to want to foul Holiday and forgetting that he already had five fouls on him.

Giannis cleans it up!! pic.twitter.com/vOpVkxIlSo


It takes a lot to have the entire NBA-watching world simultaneously perplexed. This has to rank up there in the most memorable Finals plays, alongside JR Smith's blunder in Game 1 of the 2018 Finals.

Consider everything that went into the moment. Booker, a basketball savant and professed Kobe disciple, forgot his foul situation. If Giannis wasn’t trailing the play, the Suns might have had the possession going back. If the foul was called, Phoenix goes into the final stretch without their best scorer. Maybe everything that led to the Bucks' win – the Giannis block, the Chris Paul turnover – was karmic justice for this moment.