Even without Jimmy Butler in the second half, the Heat managed to bounce back and earn a 2-1 series lead. 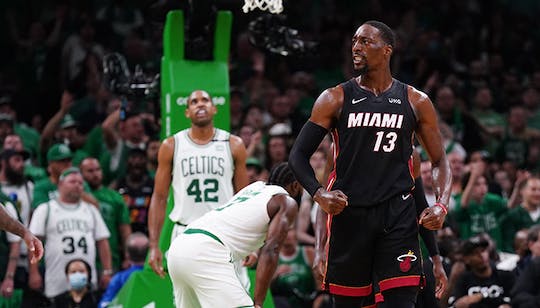 The Miami Heat are ahead at 2-1 in the Eastern Conference Finals as they took another victory, 109-103, against the Boston Celtics. Despite the close final outcome, the Heat were in control of the entire game. The Celtics never led but came close within a single point after chipping away what was once a 26-point lead.

However, Miami’s resilience was too much for the young Boston team to handle. In fact, there were three major adjustments coming into the game to help address their Game 2 loss.

The Heat really ramped it up on defense as they set a playoff record of 19 steals. They forced numerous defensive stops as the Celtics were trying to cut down the lead. Bam Adebayo, Kyle Lowry, and Victor Oladipo all tallied four steals, with Oladipo getting all of his in the final two quarters – the most crucial part of the match.

PJ Tucker also did an excellent job in denying Jayson Tatum all game long. Tatum only recorded 3-of-14 from the field, including just one 3-pointer, as he ended with a mere 10 points. He was also forced to commit six turnovers in the 41 minutes he played.

This was clearly Miami head coach Erik Spoelstra’s defensive game plan. He wanted to deny Tatum early on to get into his head and force him out of rhythm. This, of course, came with some sacrifices as locking down Tatum meant giving other players more opportunities. That’s why Jaylen Brown finished with a near double-double of 40 points and nine rebounds.

However, the Heat would rather lose to role players having a good game rather than a superstar that was not guarded properly. Sure, you let Marcus Smart and Al Horford combine for 36 points, 18 rebounds, and 10 assists, but the Celtics were unable to get the win because Tatum could not get a grip on the ball.

Stepping up without Butler

If you didn’t watch the game, you might be shocked to see that Jimmy Butler tallied just about 19 and a half minutes in a game as crucial as this. That’s because he was unable to return in the second half due to knee inflammation. He still had an all-around performance with eight points, three rebounds, two assists, and two steals.

His absence left a huge gap in the Heat’s rotation as they lost their best postseason player. That’s why the presence of Lowry was huge in this match. He did not impact the scoring the way Butler did as he finished with just 11 points on an off-shooting night, but he was able to deliver as the team’s primary playmaker.

Besides his excellent defense and four steals, Lowry dictated the pace of the game. He was dishing out a number of forward passes that allowed Miami to get into their offense early. This headstart gave the other guys clean looks at the basket because Boston’s defense wasn’t even set up by the time they crossed the ball. This adjustment made the game much quicker, which was advantageous for the smaller but quicker Heat team.

But the clincher that took the game was the presence of Bam Adebayo. In the first two games of the Eastern Conference Finals, Adebayo had a total of 6-of-10 field goals. In Game 3, he finished with 31 points, 10 rebounds, and six assists on 15-of-22 shooting.

The double in production was clearly what Spoelstra wanted to address from their Game 2 loss. He wanted Adebayo to get going early in the game using his size and talent advantage inside the paint. By doing so, the Heat was able to run their offense smoothly even without Butler on their side.

The brilliance and veteran experience of Miami triumphed in Game 3, but it isn’t far-fetched to think that Boston will start to pull new tricks out of their bag.

Will the Celtics suffer a similar fate as the Heat ride their momentum, or will the series be tied yet again come Game 4?