-
Miguel Flores
Miguel Flores has been stumbling into writing gigs since high school. He's the most reasonable Kobe fan on Twitter. He has Kobe's basketball reference page bookmarked, along with Peter Gould's columns and the screenplay to Michael Mann's Heat. Throwback Big 3s is an NBA.com Philippines series that revisits entertaining NBA star trios of old who put their unique stamp on the game.

It was the holidays of 2006 and my parents just got me a copy of NBA Live 2007. I was already a pretty engaged NBA fan then since I opened NBA.com every afternoon after school to check the latest news and stats, and I regularly watched the early games or reruns of the previous day's games on NBA Premium.

Scrolling through the list of teams to find the best team to use against my friends, I knew I had to try the team everyone was talking about then: the Phoenix Suns. As a Lakers fan, it was sort of annoying to use a different team but I wanted to win games. I didn’t know much about the Suns’ coach, role players, or system. I just knew them by their tagline: 7 Seconds or Less. Like with pizza, I was drawn in by the catchy promise of fast satisfaction.

I also knew about their big three: Steve Nash, Amar'e Stoudemire, and Shawn Marion. Those three didn’t just make highlights, they were unique with their own little quirks that—for a budding fan—were the bits I latched onto.

Nash signed with the Suns in the 2004 offseason in one of the first controversial signings I could vividly recall. The Dallas Mavericks believed they could move on from Nash, despite his relationship with their star Dirk Nowitzki. He was 30 and viewed as a reason the Mavs couldn’t get past the first round of the playoffs.

He quickly proved himself, winning MVP that season and the next. He gets plenty of slander now for those two seasons, especially from other MVP candidates during those seasons like Shaquille O’Neal. But he really was incredible for the Suns.

One of the greatest point guards to suit up.

It was like Mike D’Antoni gave Nash the keys to the offense. They had less of a system – 7 Seconds or Less was more like a set of guidelines. They wanted to push the pace, run quick-hitting pick-and-rolls, and find their players in their best spots.

This was perfect for Nash, who was genuinely the most unselfish player of his generation. At the height of his powers, Nash could make anyone look like an All-Star. He was only flashy when necessary. His signature move was probing the paint and dribbling under the rim, but instead of picking up his dribble to take a shot or pass, Nash extended his dribble - sometimes even finding himself outside the paint again. He got defenders off-balanced most of the time he could turn around for an easy jumper or find a teammate making a late cut to the rim.

He needed to be nifty, since he wasn’t athletically gifted. At 6-foot-1 with not a lot of foot speed, Nash always had to out-think the defense. Nash was the unlikeliest MVP. Before he got to the Suns, he was mostly just a fringe All-Star on a team with Dirk Nowitzki. He wasn’t putting up big numbers - he was on the All-NBA 3rd Team twice before he was an MVP, and he was already considered a declining player reaching 30 heading into the 2004-2005 season.

In an age of positionless basketball, Nash’s archetype is the one piece the game misses. He was more than just a pass-first point guard; Nash was a true team-first player. He was so efficient that people wanted him to shoot more. Nash had the prettiest jumper in the league and could get it off over most types of defenses, but he always wanted to find the best play on the court. And when the team needed him most, that’s when Nash competed hardest. Playing through a broken nose in Game 1 of the 2007 Western Conference semifinals was what sealed a lot of fans’ eternal respect for him. They couldn’t show his face for too long on TV because of how gruesome and bloody his face looked. There was no way he was going to be labeled soft again after that.

There were also the cool features the NBA did on Nash back in those days. If you regularly watched NBA TV, you would know that Nash was Canadian, skateboarded, and probably loved soccer more than basketball. He had a habit of licking his fingers as he dribbled up the court and had the best hair in the league. He was effortlessly cool and the hero for wannabe point guards everywhere.

Stoudemire won Rookie of the Year over Yao Ming in 2003. Then, when Nash signed with the Suns, Stoudemire was the biggest beneficiary. Together, Stoudemire and Nash formed the best pick-and-roll duo in the league. Nash’s creative passing had a lot to do with this but Stoudemire’s midrange shooting and ability to finish at the rim were also top tier. Stoudemire went from averaging 20.6 points on 47.5 percent shooting before Nash came in to 26.5 points on 55.9 percent shooting and a spot on the All-NBA 2nd Team the following season.

Stoudemire was ahead of his time. If he came up in the league today, he would probably have developed a game closer to Julius Randle's, but he would be way more efficient. He was 6-foot-10 with a solid wingspan. He could handle the ball a little but his biggest strength was his speed and leaping ability. It’s easy to forget, but this was the guy that gave Tim Duncan, considered by many as the best defensive big man of his generation, the most trouble outside of Shaq. If he couldn’t get past you, Stoudemire jumped over you.

He was the most outgoing of the Suns’ Big 3, being one of the first NBA players to be heavily involved in runway fashion. He also wrote several children’s books, titled Standing Tall and Talented.

Duncan was classic rock. Nowitzki was French house music. Stoudemire was punk hip-hop. He deserves to be remembered among the best power forwards in the league.

Don’t ever let anyone tell you your jumper is ugly. Shawn Marion was a career 36-percent shooter on corner 3s and 81 percent from the free throw line with his shot looking like a chest pass.

That’s the trap with Marion; everyone mostly remembers his jumper but not his overall game. Marion played 16 years in the NBA because he was one of the best man-to-man defenders and ball hawks ever.

Before Nash arrived in 2004, Marion already had some success in the league, averaging around 20 points, nine rebounds, a couple of steals, and two blocks per game. But Marion’s defense shone on a supercharged offensive squad that was sorely lacking on the other end of the court.

He was a lot like Mikal Bridges, but Marion was also explosive in transition and had nifty ways to get his shot off in the halfcourt. He was called “The Matrix” for a good reason. He was also thrown at the other team’s best player almost every game and he made a name for himself stopping guys like Kobe Bryant and Tracy McGrady.

The word “underrated” gets thrown around liberally these days but Marion is the definition of that. At his peak with the Suns from 2004 to 2007, Marion averaged 19.6 points, 10.6 rebounds, 2.0 steals, and 1.5 blocks. He was a member of an All-NBA team twice and was an All-Star four times. There are Hall of Famers with way less impressive credentials than Marion, which means he probably deserves a spot there.

As stated, this Big 3 formed in the offseason of 2004 as the Suns, who originally drafted Nash in 1996, brought him back to lead a young, promising group who underachieved the previous season.

From a 29-win team, the Suns won 62 games in the 2004-2005 season and earned the top seed in the Western Conference. Nash, Stoudemire, and Marion powered the group to a sweep of the Memphis Grizzlies in the first round then a six-game conquest of Nash’s former team, the Dallas Mavericks, in the second round. They got clobbered by the Spurs in the Western Conference Finals but there was plenty of hope for the following season.

The following season, the Suns never quite got back into their top form as Stoudemire suffered a knee injury that kept him out for most of the season. Still, with Boris Diaw taking Stoudemire’s spot, the Suns rallied back to the Western Conference Finals where the Mavericks got the best of them in an epic six-game series.

The 2006-2007 season had a lot on the line. The Suns were easily written off as an all-offense squad that could never be successful in the playoffs. With Stoudemire back healthy, the Suns cruised to a 61-win season and had the best offense in the league for the third consecutive season.

But none of that mattered; they had to win a title in order to gain any respect. After handling the Lakers in five games in the first round, they met the Spurs in one of the most controversial series in NBA history. Game 1 featured Nash’s busted nose. In Game 4, with the Suns comfortably on their way to tying the series at 2-2, Robert Horry hip-checked Nash into the LED boards, an incident that led to Game 5 suspensions of Stoudemire and Diaw for leaving the team bench during the altercation.

There went all of the Suns’ momentum. They lost the next two games and possibly their best chance at winning a title. The Spurs took down the overachieving Utah Jazz in the West finals before sweeping a young LeBron James and the Cleveland Cavaliers in the finals. What if Horry never hip-checked Nash? 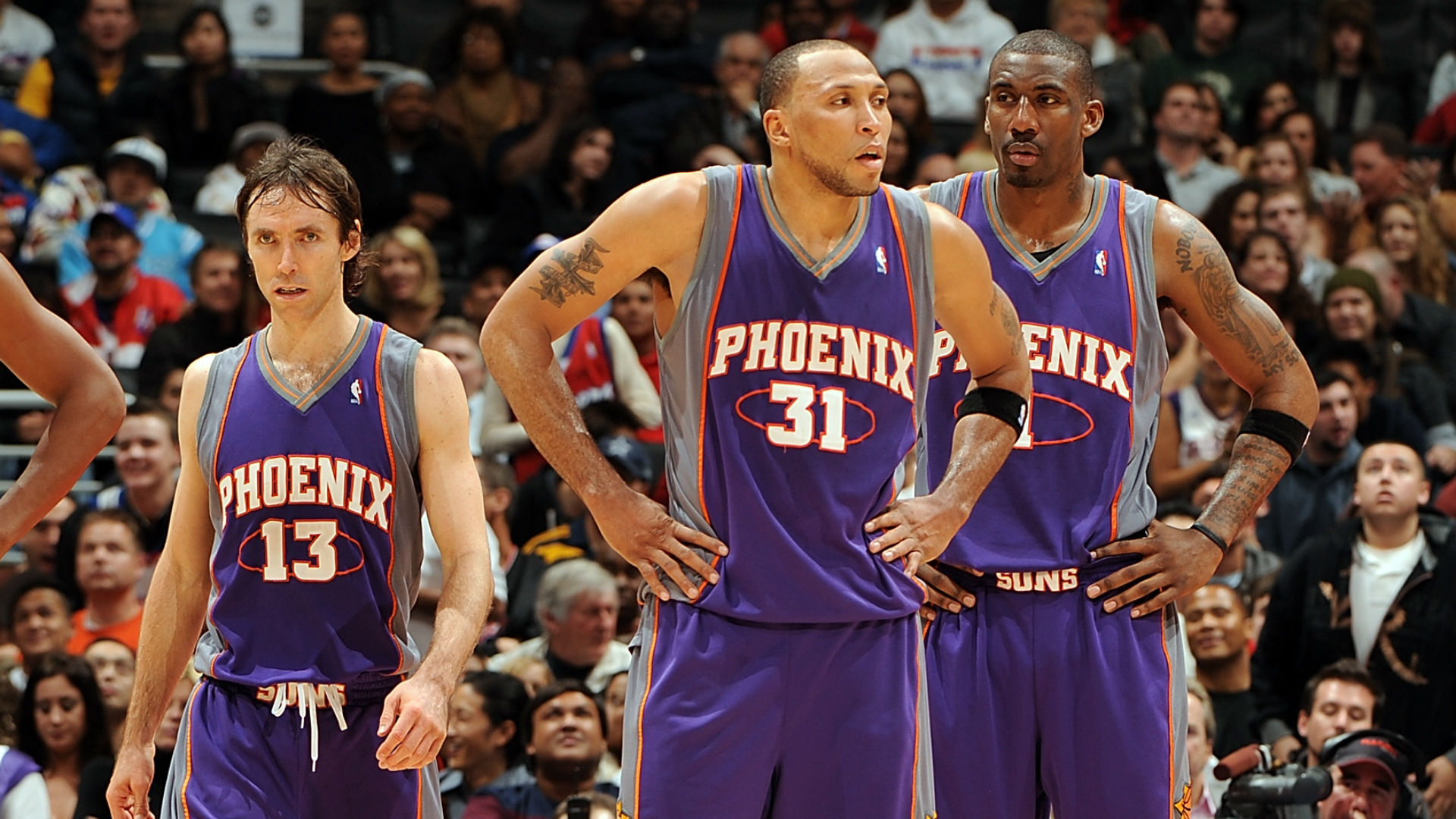 The end of an era

That was the last big moment for the Seven Seconds or Less and the Suns’ Big 3. Shawn Marion, tired of being low-balled in contract extension talks and having his name being floated in trade rumors, wanted out of Phoenix. The Suns traded him for Shaq during the 2007-2008 trade deadline.

Shaq never quite worked out for the Suns. It wasn’t until the 2009-2010 season that the Suns would rekindle their old magic under Alvin Gentry. Just as everyone counted Nash and Stoudemire out, they led the Suns to another Western Conference Finals, where the Lakers needed a miracle putback from Ron Artest in Game 5 and a magical Kobe finish in Game 6 to put them away.

After that, Stoudemire signed with the New York Knicks. The following season, Nash signed with the Lakers. Among the Big 3, it was Marion who got a championship, helping the 2011 Mavs overcome the Miami Heat in one of the most memorable NBA Finals ever. Stoudemire had one great season with the Knicks, then his knees just wouldn’t cooperate and let him stay healthy. The same went for Nash’s back that sidelined him for most of his time with the Lakers and eventually into retirement.

The Suns’ Big 3 might have flamed out but they are inarguably the most influential group to contemporary NBA basketball. Teams now mostly run pick-and-rolls. They shoot almost exclusively 3-pointers and layups – the types of shots the Suns encouraged. They might not be delivering in seven seconds or less but teams today definitely learned from Nash, Amar’e, and Matrix.

Luka Doncic and the Mavericks hope they can contain Damian Lillard and deal the Blazers another loss.