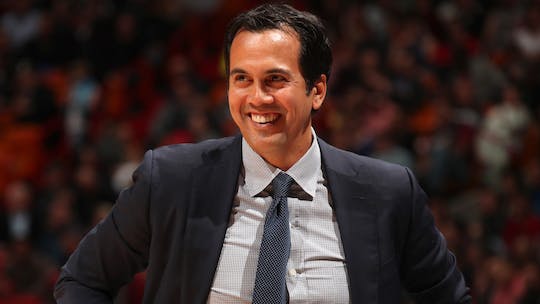 Tim Cone of Barangay Ginebra San Miguel has formed a unique and personal friendship with the Miami Heat's Erik Spoelstra.

It's not just the winningest coach in Philippine basketball in courteous acquaintance with a Filipino-American coach in the NBA. It's not just mere happenstance or a minor commonality. Their friendship may be deeper than most fans realize.

"I don't know why Erik Spoelstra gives me the time of day. He has so many people to choose from. I just feel so fortunate that he responds to my texts when we're within a few hundred miles from each other. We find a way to connect and see each other," Cone said in a recent interview on The Game.

Not many know that the bond between Cone and Spoelstra actually didn't start with the sport of basketball. Instead, it was a different exercise that led the two to meet. Cone's father's first cousin is actually the yoga partner of Spoelstra's mother in Portland, Oregon.

"When they were having yoga, my father's cousin said to (Spoelstra's) mother that he had a nephew in the Philippines that was a basketball coach," Cone shared. "Of course Erik's mother is pure Pinay. The mother said 'Well Erik is going to the Philippines this summer, I'll have him look him up.'"

Spoelstra eventually came over to the Philippines to run clinics for the NBA. One thing led to another and Cone found himself being introduced to Spoelstra.

"And he looks at me, points at me, and he goes, 'You're the guy that I'm supposed to meet. If I don't meet you I am in so much trouble with my mom,'" Cone said about his first recollection with the Miami coach. From then on, the two coaches connected.

"We've been friends and close ever since. It's ironic that it's [a] small world, right?" Cone said smiling.

Cone's and Spoelstra's relationship obviously goes beyond basketball, but they are hoop junkies who talk about the game.

There are similarities in terms of style and philosophies between the two coaches. The triangle often reads the defense first before adapting and finding a gap for an open shot. The triangle system is therefore a good supplementary idea to Spoelstra's viewpoint of reading and reacting.

"They're truly one of the contenders because they are a playoff type team," he said of the current Heat squad, mentioning that he's copying them a little bit right now. "They have the defense to play well during the playoffs and they have enough of the high-level players in (Jimmy) Butler and (Kyle) Lowry, and (Bam) Adebayo plus the shooters to go along with them. I think they're really a strong, strong playoff-contending team. He (Spoelstra) said that this is his favorite team he's ever coached."

As a 23-time champion coach in the PBA, Cone knows a thing or two about winning a title. And looking at the Heat team, he’s confident that they have all the tools to make a serious run at the championship.

"I think Miami can do very well in the East. Like I said, they can defend anybody. You know me, I'm a big believer of defense winning championships. [You] get to playoff time, it's your defense that wins and they have the defense to do it. "

Cone and Spoelstra's relationship may have a peculiar origin story that involved yoga mats and loved ones, but it is definitely treasured. It is a friendship forged by coaching and molded by their love for the game.

"I have been on some fantastic walks with him. He's a walker. He likes to walk. He likes to get up in the morning. He does hour walks every day. And to have the great fortune to walk with him during that hour or two, and I tell you it is exhausting, but to be able to walk with him and exchange ideas and talk, I can't think of anything that's more thrilling for me," Cone said. "Again I don't know why he allows me to do that, but I'm just so tickled pink that he does. I feel so blessed and lucky that he allows me to do that with him."