The Suns' forward injured his right knee in the third quarter of Game 2 of the Finals. 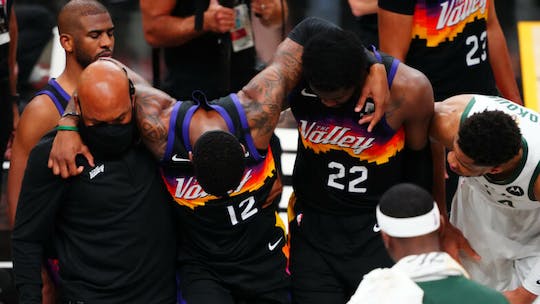 Torrey Craig of the Suns injured his right knee during a collision with Giannis Antetokounmpo in Game 2.
MILWAUKEE (AP) — As the Phoenix Suns’ NBA Finals lead is growing, their rotation could be shrinking.

Suns coach Monty Williams said Torrey Craig’s status for Sunday’s Game 3 is uncertain after the reserve forward hurt his right knee during a collision with a driving Giannis Antetokounmpo in the third quarter of Phoenix’s 118-108 Game 2 victory over the Milwaukee Bucks on Friday (PHT).

“He got some testing done yesterday,” Williams said Saturday. “All of that came back clean, but he’s still sore. So I can’t make much of a statement on his availability or anything like that. We’re going to get through today. We’ll have a light practice today and put him through some paces. We’ll be able to make a better statement about his availability tomorrow, and then we’ll adjust accordingly.”

Williams mentioned Cam Johnson and Abdel Nader as players who could have bigger roles if Craig is unavailable. Johnson has averaged 9 points and 19.5 minutes in the finals. Nader has played just one minute over the first two games of this series.
Read Next
News