Undefeated All-Star captain: LeBron and his pursuit of happiness

LeBron James, who enjoyed his 17th All-Star Game despite not getting his usual numbers, says he wants to “retire” as All-Star captain to preserve his perfect 4-0 record. 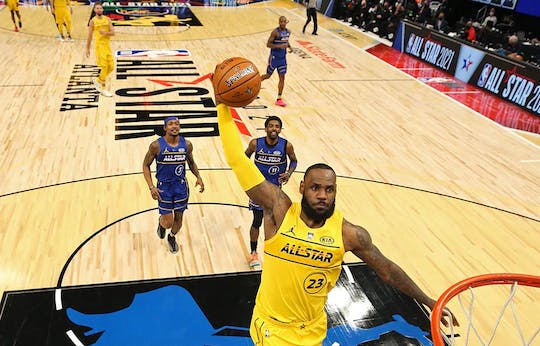 LeBron James played in his 17th All-Star Game recently, and it was the worst of his career, numbers-wise.

LeBron has been a staple in every All-Star Game for the past 17 years, much like he has been during playoff time, much like WiFi has been in every coffee shop. He’s ubiquitous.

He holds the league record for total points scored in All-Star Games with 385. He is averaging around 24 points in 28 minutes played per All-Star Game. He had that one in 2012 where he went full-on assassin mode, hitting six of eight from 3 for 36 points. He had that one the year prior where he messed around and got a triple-double (29 points, 12 rebounds, and 10 assists), becoming at that time only the second player to do so after Michael Jordan.

So it was mildly disappointing to check LeBron’s stat sheet for this year’s All-Star Game, as it read more like a stat sheet of a nervous, wide-eyed first-time All-Star and not a stat sheet of an alpha dog who won All-Star MVP three times. Take a deep breath and briefly look away if you have to because this is going to be a bit painful: four points in 13 minutes (both career-lows), 0-of-3 from 3, two rebounds, four assists, and a block. He also sat on the bench for the entire second half. That’s never happened before.

Having said all that, here’s a twist: LeBron James played in his 17th All-Star Game recently, and he looked the happiest he can be.

LeBron earlier said that he had “zero energy” and “zero excitement” for this year’s All-Star Game. While that sentiment accurately reflected on his stats, it certainly didn’t show when he was out there, doing his chalk toss ritual, as his one-time rival and first-time teammate Steph Curry looked on in childlike admiration.

LeBron appeared to be enjoying himself and genuinely having fun throwing dimes to Steph and Giannis Antetokounmpo, who was named the game’s MVP for not once missing a shot.

“It's my first time teaming up with Steph, and it was an honor to be on the floor with him. A guy that I've seen come and be the player that he is today. It was just great to be out there with Steph and Giannis and the rest of the guys, too,” LeBron said in the postgame media availability.

The “rest of the guys,” those LeBron drafted as de facto GM, were also having fun. For Damian Lillard, fun meant breaking the laws of quantum physics through a half-court heave showdown with Curry.

For LeBron, the fun began days earlier when he formed a starting five that would force the Monstars into retirement. He picked Giannis first, then Steph, then Luka, then Jokic. His top choice for sixth man, Lillard, proved to be the game-changer. Lillard hit eight 3s, including the game-winner from just inside halfcourt, another example of Dame disregarding the rules of time and space.

The win gave LeBron his fourth straight as designated captain, helping him reach yet another apex that future stars can only dream of climbing.

“I hope that they allow me to retire from being an All-Star captain, so I can retire with a perfect 4-0 record. I'll keep that forever,” he said.

For more than half the game, LeBron mostly chilled on the bench—cheering and snacking while his team did the fun stuff, the things he used to do in his past 16 All-Star Games.

Perhaps he’s on a different wave now and past proving himself in glamorized pick-up games. Perhaps there was a part of him that just needed to rest. Perhaps LeBron already had his mind elsewhere, pursuing others kinds of happiness.

One version of that happiness, in the distant future, is to have the chance of one day sharing the court with his 16-year-old son Bronny.

“That's definitely one of my goals, but that's a long-term goal. My son right now is in high school and enjoying what being a teenager is all about. But that would be pretty cool to go on my resume if I'm able to be on the same court as my son some day in this league,” LeBron said.

Another version, a more immediate one, is the prize at the end of the playoffs, where it’s guaranteed LeBron won’t be chilling at the bench.

“I've got a lot of things that I'm still passionate about and motivated about still doing in my career, and still trying to win championships,” said LeBron. “That is the goal right now, and that is the motivation right now.”
Read Next
News