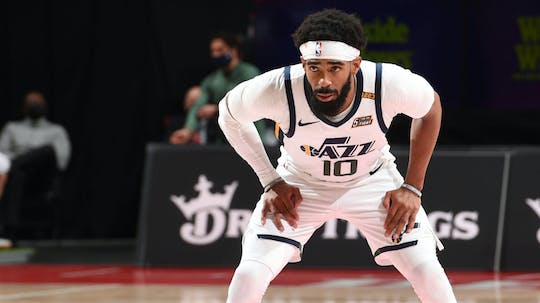 Utah Jazz guard Mike Conley has been named by NBA Commissioner Adam Silver to replace injured Phoenix Suns guard Devin Booker on Team Durant in the 2021 NBA All-Star Game, which will be played on Monday, March 8 (PHT) at State Farm Arena in Atlanta.

In addition, Conley will replace Booker in the 2021 MTN DEW® 3-Point Contest, which will be held on March 8 before the NBA All-Star Game.

This is the first NBA All-Star selection for Conley, who is in his 14th season. He is averaging 16.1 points and 5.7 assists and shooting a career-high 42.2 percent from three-point range in 29 games this season. Conley, 33, has helped the Jazz post an NBA-best 27-9 record. He joins two Utah teammates, Team LeBron center Rudy Gobert and Team Durant guard Donovan Mitchell, in the NBA All-Star Game.

Booker is unable to play in the NBA All-Star Game or participate in the MTN DEW® 3-Point Contest because of a left knee sprain. He was named to the NBA All-Star Game by the Commissioner as an injury replacement for Los Angeles Lakers forward Anthony Davis. Booker is averaging 24.9 points and 4.4 assists in 31 games this season.

According to NBA rules, when a player selected to the All-Star Game is unable to participate, the Commissioner shall choose a replacement from the same conference as the player who is being replaced. Booker and Conley both play for Western Conference teams.

One Sports and NBA TV Philippines on Cignal will air the NBA All-Star 2021 on March 8. The Taco Bell® Skills Challenge and the MTN DEW® 3-Point Contest will start at 7:30 AM. NBA All Star-Game coverage will begin at 9:00 AM, with the AT&T Slam Dunk taking place at halftime.