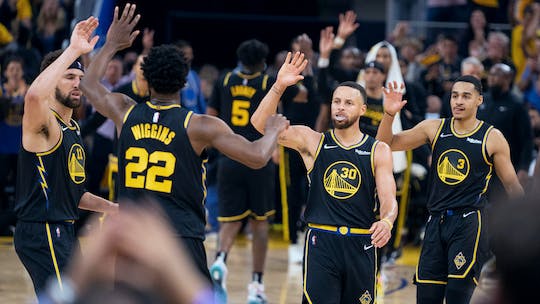 The overreaction to the Golden State Warriors’ 25-point beatdown of the Dallas Mavericks is that this will be a short series.

If you look at the Dallas side, there were a lot of glaring red flags to base this overreaction on: the horrible shooting, the lackadaisical defense, and have we mentioned the horrible shooting? On the Warriors’ end, they just looked to be having fun. By now, we all know the result when fun is being had in Dub City.

Right from tip-off, the Warriors just looked as comfortable as they could ever be. They got to the basket when they wanted to and they created shots for themselves when they needed to. Draymond Green flexed. Steph Curry danced. Andrew Wiggins worked.

Whoever was face-guarding Luka Doncic this series would be the x-factor, we all knew that, and Wiggins showed that–at least for Game 1–he was the guy. Not only was he able to make Doncic bleed for his points but Wiggins also delivered on the offensive end. He scored 19 points, nearly matching Doncic’s 20. He also scarred the face of Doncic early in the first quarter, when a wayward swipe resulted in a very villain-looking scratch that, presumably, Doncic will use as motivation from here on out.

But Wiggins didn’t do it alone. When it seemed like Doncic had him beat or when Doncic was mismatch-hunting, the other Warriors (Kevon Looney, for one) were able to cover for him. The Mavericks helped him too. When the ball went around and found a shooter from outside the arc, the shooter missed.

The Mavericks came from an uncertain, dangerous seven-game series against the Phoenix Suns and it showed. Sure, they won Game 7 by schooling the Suns, but they exhausted all efforts before they got there. The Warriors, on the other hand, handled their business by eliminating the Memphis Grizzlies in six games. It showed too. The extra rest day or two that Warriors had looked to give them that extra bounce in their step. Otherwise, Curry wouldn’t have had the added juice in his celebratory grooving.

Seven Warriors scored in double figures, led by Curry’s 21. Although it wasn’t a particularly good shooting night for them from outside (10-of-29 from 3), Golden State managed to slowly pull away from Dallas with their lockdown defense and up-tempo game. That’s no surprise. The Warriors’ pace is the thing that would make Mavericks head coach Jason Kidd up at night, thinking of another surprise counterattack.

Bad outside shooting aside, the Warriors pretty much did everything right in Game 1. There were still hints of sloppy play and carelessness, but it didn’t hurt them as much because the Mavericks just couldn’t buy a bucket. The Mavericks will surely make adjustments though. Doncic’s face wound will heal. The Mavericks’ shooters should be better than 23 percent.

If they’re not, then the Warriors will just continue to get their way; the flexing and dancing won’t stop. Game 1 was an example of how a team that’s been here before should behave versus a team that hasn’t.

Now that they’re up 1-0, the Warriors just have to be careful in not making the mistake of acting tough.

What went wrong for the Celtics?

Shooting woes are just one reason why the Celtics suffered a huge loss in Game 2.